The sound of the Frustrations is relentless. Coarse and mangled tones, often with a somewhat panic vibe likened to mutated hell cats emoting death rattles as their sharp claws scrape breaking window panes and disorientation settles in with wavering tempos and feedback; Running drum beats and brawny bass lines under pedal fuzzed guitar scrapes, howled vocals and an erratic tempo that slows down and gives space for improvised solos or bass blurts or drum fills but without warning winds back up to the uneasy, almost nauseating tempo like some sugar-addled youth who doesn't know his own strength, blindfolded, armed with a bat and spun ragged to be let loose with the world as his piñata. 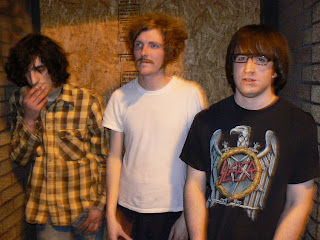 Somewhere in all of this, you have the tip of the iceberg for the Frustrations…their debut 7" from 2005 could not have been more aptly titled – "Nerves Are Fried."
Drummer Scott Dunkerly says 'surf' and 'psychedelic' and 'off sounding music,' but never straight out punk.
The Frustrations, with Dunkerly, Colin Simon on guitar/vocals and Sean Dufty on bass are much more than punk – though they collide with the typical vigor connected to it, transcending and twisting those perceived punk styles of machine gun percussion, blurred-blade riffage and structures that sound like they're purposely flying off the rails into seas of abrasive sounds. They take that aesthetic and stretch it into a more cerebral sound that drifts confidently into slower, subdued compositions, mixing in unique tones or left-field influences and makes room for improvisation.

Dunkerley manages local label X! Records, (beginning in 2003) which he started out of high school (Kimball) with aspirations of running his own studio. With a digital 8-track he recorded a CD-R for his friends Fontana, a local punk band whose drummer, Colin would eventually join Dunkerley (with Dufty, who also plays in 1964) to form Frustrations in late 04.
Dunkerley had been running with the Fontana members for much of the early 00's through sharing bills (pairing Fontana with Dunkerley's earlier bands, the Yarbles and the Skinny Fists.) 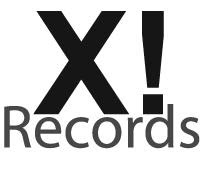 The goal was to "get a record out as soon as we could," said Dunkerley, as 7" Nerves Are Fried came out in 05. "Other bands I was in (Skinny Fists, Yarbles), we recorded so much and just sat on it so long." The Frustrations' Exploding Mind 7" came in 07 (on Ohio-based Die Stasi) and last year, X! put out Frustrations' striking and propulsive debut LP Glowing Red Pill, (which will be getting a proper vinyl-release treatment this August.)
When recording, "we don't have any grandiose expectations," said Dunkerley, "Get [songs] down, get em sounding good and then get em out." In terms of Dunkerley's own technique as an engineer, "I try to keep it pretty basic sounding, where you can hear everything, I want it to jump out at you but not where you have all these effects that make it sound dated." 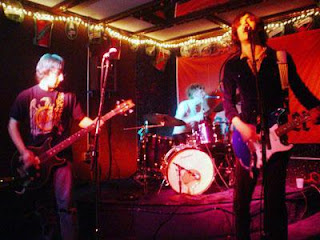 "Once we have a song written we usually don't need to practice, so that might add sort of…the rawness…" [to the live performance.]" I recall to him their set at Detour's inaugural festival in Sept. 07, where breakneck tempos and throat curdling screams seemed to rattle the foundation of the Garden Bowl (notably and unfortunately ending in a considerable scuffle between fans/bands/and security.) ("Yeah," notes Dunkerley, "we played really fast that night.") Disarmingly, however, the very next set I saw from them was further from punk and more toward a cerebral, down-tempo pyschedelic trip.
Dunkerley particularly emphasizes their improvisation within song structures. "That's what a live show should be – one of a kind."
The Frustrations toured with label mates Terrible Twos through summer 07, facilitating an emphasized emergence for both bands. The Terrible Twos were among the first bands to release with X! Records, an alliance born "hanging around and playing shows. I remember I met Chris (TT's singer/guitarist) at the Painted Lady. We did a show at Smalls; we really liked each other's bands and we became friends.
Regarding their early 7" write-ups referencing comparisons to the hallowed Clone Defects, Dunkerley said, "That was cool. Tim (Vulgar, Clone Defects singer/guitarist) was a friend of ours from day-one, he's always pushed us."
Asked where the band name came from, Dunkerley said, "I guess it came out of...honestly...out of the frustration of trying to decide on a band name."
Coming up, X! will release a 7" by Coney-inspired punk duo the Mahonies and on July 25-26, X! will curate an X! Records music fest (featuring Tyvek, Fontana, the Frustrations and many more) at the Bohemian National Home.
Next Saturday, (5/3) see the Frustrations at Curare III, at the CAID (more news on that SOON, but for the meantime: featuring Netherfriends, Carjack, Pinkeye, The Oscillating Fan Club, 1964, Beekeepers, The Directions, Lenny Stoofy, Jehova's Witness Protection Program and Lightshow Bob)
more info at:
www.myspace.com/thefrustrations
www.myspace.com/terribletwos
www.myspace.com/tyvekmusic
www.myspace.com/fontana1116
www.myspace.com/mahonies

That Scott is real cute