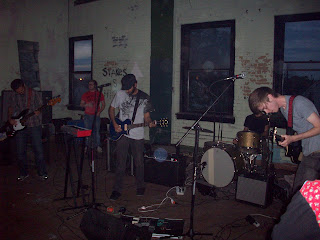 “On the way to Detroit…”

Asim Akhtar’s way of writing is inspired by movement, the feeling of an overwhelming, shunting force, put to music. “It’s a linear thing,” said the Oblisk singer/guitarist, “I diagram them by drawing them out. I want it to flow like this,” he gestures upward with his hands, “and then it goes off kinda like this,” then waves them downward. He can’t write music notes, per se, and though he has plenty of experience jamming with longtime friend, drummer Elturk, he often “maps out” melodies and time signatures. “I had no idea,” said Elturk, “It sounds like a seismograph.”

“Movement,” Akhtar says again, describing the wavy dreamscapes of the band’s psychedelic space rock and rhythm heavy feedback-fuzzed, pedal warbling Brit-pop revivalist post-punk. “Shifting of the gears, trains flowing down, picking up people, planes taking off, whatever, getting into a car accident, going into the hospital, getting out and then going back the next day…” 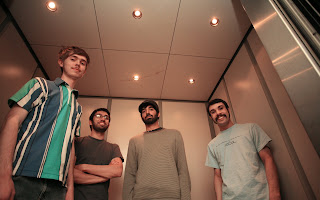 Guitarist/keyboardist Nick Baran nods, “…Probably the best way to describe it.” Movement, indeed, this interview nearly took place entirely inside an elevator – but that’s another story…

They all agree that the roots of the band are fairly mysterious; starting out in 01 they soon began handing out free EP’s on art-splattered mini-discs with band name, or any names at all, indeed, when the band started in 2001, between longtime friends Akhtar, Elturk and bassist Manan Desai, they didn’t have a name. They joke that because of their cryptic online profile, no one would know what they looked like until the day of the show. From there, the Pakistani Akhtar, the Philippino/Lebanese Elturk, the Indian Desai and Baran, from Florida, would often mess with curious crowds by announcing a rotating country of origin at each show, be it Iceland, Japan or, “Hi, we’re Oblisk, from the Artic Circle.” And by the way, “That’s Oh-bliss-k.”

Indeed, a very worldly band. Baran moved up from Florida as a freshman, while Aktar, Elturk and Desai grew up together, through “the awkward years” as teenagers, attending Adams High in Rochester. Looking back, Desai said, “We realized we all had high squeaky voices when we met, it’s weird to think about.” Then, Elturk, commenting on the jam sessions that would serve to be the band’s genesis: “…we would just jam, never like that Phish-jam-band stuff, but just...it was always freedom to do whatever, never really critical, whatever came out...”

In 2004 they released a proper EP. Afterwards, that same year, Akhtar left to travel the world, in search of inspiration – with a backpack, all the money he had in the bank, some plane tickets, a notebook, a camera and nothing else – for more than 100 days, “living like a nomad.” “I had to find some inspiration, some words, and that was the right moment for it to happen,” and he soon started charting out the lines of their next LP, Tune In/Tune Out, somewhere in the jungles of Thailand, or on the top bunks of hostels in Europe. (The album was also recorded with bassist Kyle Babcock.)

Four years later, it finally debuted – but Two weeks before their CD release show, however, Akhtar’s lab top, holding all the recordings, software and mixing of the album, died, (“…it sounded like a constipated hyena!”) This led to a torturous and nerve-wracking run-around, with failed data recoveries and computer support stores skipping town and the whole monstrous headache of re-re-mixing, or re-doing entire parts, or asking friends to help out. Indeed, the band expressed a great thanks to their friends, noting that over the 4 year adventure of making their 14-song full length, they recorded inside upwards of 25 different locations: kitchens, basements, music rooms, hallways and almost an elevator. “It took us forever because we were 100% DIY,” said Akhtar. 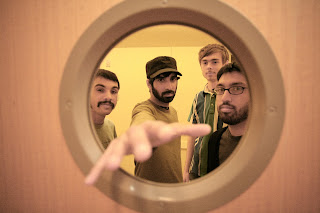 Thankfully, he had “an old-old back-up.” Since the record came out this year, they’ve been playing out consistently around Detroit – with an East Coast tour on the horizon, as well as the CAID’s Summer Smash festival.

I ask about influences, and Akhtar points to Desai, claiming him to be a human jukebox.
He shrugs modestly, maneuvering to: “The stuff that everyone liked a lot was Spacemen 3, Spiritualized…”

“But what do you like?” Akhtar pokes.
“I like Alice Coltrane a lot, Pharaoh Sanders…so, that period of music. That’s another kind of wall-of-sound thing. Hip hop too, man, Detroit hip hop, Jay-Dee…”
“Ride,” Akhtar offers for himself, “My Blood Valentine, Spiritualized, Spacemen 3. The Verve, Radiohead…you can’t deny…”
“Not to touch on that too much,” Baran offers, “I think the first time I heard Jonny Greenwood’s solo on ‘Paranoid Android,’ that made me want to go buy effects-pedals. But, I’d also say Sonic Youth and Smashing Pumpkins are my biggest…”
“Been listening to a lot of Pulp lately,” says Elturk, “lot of the psychedelic stuff, just the whole Creation Records scene…”
“How ya gonna forget Brian Jonestown Massacre?” proclaims Akhtar.
Nodding, Desai says, “That’s a good mergence point too…”
~
Asking Akhtar and Baran about their overwhelming reverb storms brought on by their pedals, Akhtar reveals he also uses two pedals for his voice. “People either like it or hate it,” he says, pausing to imitate listener’s most common question, “‘What are you saying?’”

“There’s a lot of depth,” says Elturk, “you can’t really understand what your saying, but you can still sting a song and mess up all the words…”

One of their best songs is a steady pounding, dark ethereal rocker, “Ancestors,” with plenty of stratospheric guitars stabbing and sashaying their way gracefully through the song like some marvelous reverberated northern lights. The song is about Detroit, as “a symbol for the world…” said Akhtar. “What has happened to all these places. How, a lot of people lived in certain places, they move from there and what happens there [afterward]? We’re a province of that…our families moved from 3rd world countries to here, what will happen to our great grandchildren? What happened before you even knew what was going on? And, look at it now. We’re a Detroit band, and I think all Detroit bands have a lot of pride in Detroit. We may not be the tourist capital of the Midwest, but we are the music capital, in my opinion. We could be living in South Dakota…”