Here’s the thing with Frontier Ruckus:
It’ll be heavy. It’ll be peppy. It’ll be provocative and it will be catchy. And, if you really wanna bend your ears in, you can parse all the particular instruments the Ann Arbor-born quartet deployed to renovate the alt-country rock archetype, (something that’s becoming part of their M.O. after 10 years). And, if you’re listening closer, still, you’ll fall under the waking-nightmare nostalgia-spell of the lyricist, with scribbled words of weary weight from pages of packed with potently evocative, potently wistful and potently symbolic imagery.

Now based between Detroit and Ann Arbor, with Mathew Milia on vocals/guitar, David Jones on banjo, Anna Burch on vocals and Zachary Nichols on trumpet, they’re set to wrap up a tour that supports their fourth full length album, Sitcom Afterlife, with a performance at The Loving Touch in Ferndale tomorrow night.

Jones and Milia have been writing music and performing together for well over a decade. Their haunting and heart-swooning debut album The Orion Songbook conjured the specific Frontier Ruckus spirit into a nearly full formed apparition, over atmospheric organs and prickled banjo, heavy booted bass trudges and cool autumn-stung gale guitars, with those ever-trilling nasal voice, quavering as though it’s always just about to break and breeze away like birch bark over a Great Lake, gutting itself with vulnerably confessional words of the sweetest poetry (that only an English Major could muster) that dazzlingly mythologizes the eerily universal nostalgia of Midwest coming-of-age-ness…

And here we go, with Sitcom Afterlife. Listen:
-
Milo: How’s the autumn been going for you guys? How did the release show go at the start of the month?
Matthew Milia: To be honest, playing these songs from the new album live is some of the most fun I've had onstage in a really long time. And they were, in a way, intentionally designed with that in mind; I wrote them two years ago when I was in a bit of a dark place. So, somehow the tunes and melodies and song structures that were coming out of me began to work in a sort of antithetical way to the bummed-out lyrics they were supporting. The songs sounded upbeat and classically pop. Poppier than anything I'd written prior. It was like I was allowing myself a sort of escapist vent to feel good vibes within all the grief. Coming up with catchy tunes really gave me something happy to cling to and rattle around in my brain. 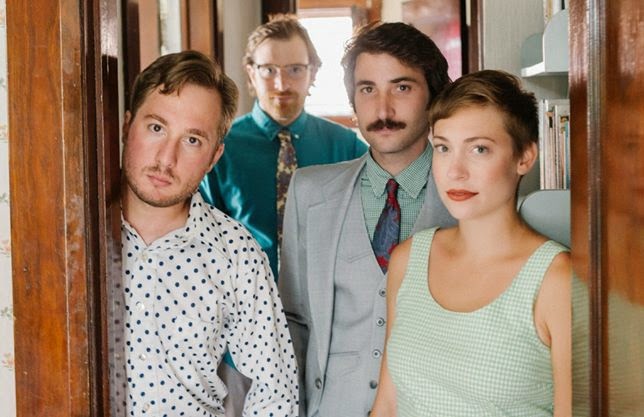 Milo: This is your fourth record. I don’t know why, but, to me, that feels like a time when a band has really turned some kind of corner or made their mark, ya know? You’re establishing a canon, at this point, right? Are you getting there, does it feel that way and what’s been the key to keeping you together, keeping you going?
Milia: Four albums in, it definitely feels like we're riding a vehicle a bit more substantial at this point. We have a really diverse catalog to choose from each night when we perform. People who have been following us for a while seem to appreciate the different albums individually and the eras they represent within an overall project. It's very gratifying to have that sort of established mythology at play—everything new that we create enters that world and interacts with preexisting characters and places in contrasting or complementary ways. And on a personal basis—the fact that we've already been doing this together for so long, as best friends lumped together in cramped spaces in constant locomotion, whether physically on tour or creatively within the music, we've learned a lot about how to keep the thing on the rails. We all respect each other so much and believe in the overall concept of the band so dearly that all that typically wins out over inevitable petty daily grievances, etc.


Milo: Have you ever thought of or worried about maybe overwhelming your audience? Or, by now, is that maybe what you’re known for – all these montages of memories kinda swooning over the song? Can you talk about how a lot of your songs wind up going toward more epic scopes that paint these rather vast and rather vivid pictures…
Milia: The only consideration for that I've ever really had has been a result of external whispers into my ear. Not from anyone in the band, obviously, but from like, previous people we've known in the "music business" or whatever. People who thought we have an awesome thing going on, but that maybe we'd sell some more records or hook a more general fan base if I were to streamline things a bit. Left to my own devices though, as I think is pretty evident at this point, lyrical density and image-overload is pretty much my default setting as a writer.

Sitcom Afterlife, though, does deliberately rein it in a bit. It's the most to-the-point and direct I've attempted to write songs to date, if you can believe it. Still, I gave myself little indulgences like "Crabapples in the Century's Storm" and "A&W Orange and Brown".

Milo: We spoke before the release of 2013’s Eternity Of Dimming. You’d mentioned anticipating this next record (Sitcom Afterlife) being more of a college-rock throwback with 3-minute pop songs. And, yet, you’re still flirting with 50-minutes and a couple of six-minute jams. Tell us about how this album grew, as you made it, and how your vision for the lyrics came together.
Milia: It's very much a break-up album. Of our albums it's the most to be concerned with one specific catalyst or event. So the songs came very quickly and all sort of represent different approaches to one situation. What I like about it is that the tunes deal with something quite heavy or acute at the time with varying degrees of gravity or levity or humor or bitterness to help me cope and move on. When you're working through something harsh, you kind of fluctuate day to day on where you are with it, how you feel.

The various lyrical tones of expression reflect that temporarily fractured mental state—different aspects of my psyche vying for primacy: pride, compassion, guilt, love, jealousy, lust…. I wrote all the songs out of self-therapy, on long anxious walks feeling kind of desperate. It's been two years since I wrote them and I can't fully associate now with how I was feeling then—time works that way—but the songs remind me that it, at least then, at that time, felt quite dire.

Davey, Zach, and Anna were all instrumental in helping me turn these painful documents into more dynamic and well-rounded tunes. They helped me emphasize the intrinsic pop elements which transformed the confessional subject matter into bright melodic escapes, for me at least. Zach layered so many amazing counter-melodies on synths, horns, saw, etc. Davey introduced this new instrument that sounds like a shimmery Tele but has a banjo head that added great jangly texture. And bringing Anna's harmonies back to prominence on this record added such a needed feminine balance.

Milo: That must be part of the key to keep you going, back to a prior question, that collaboration, the friendship, the cohesion you find on stage and in a studio…
Milia: Having friends that can enhance your work so intuitively is a real blessing. We recorded it in Corktown at Chris Koltay's studio, a block from where Anna and I now live. It's the first record we've done outside of Ann Arbor and it really has a distinct sound from our other stuff.

Milo: Let’s just dive in. What is the “Sitcom Afterlife?”
Milia: Sitcoms to me represent these very safe, comforting eras of time and place—insulated, vacuumized capsules of extremely reliable if not taken for granted setting and company. A collection of seasons in which you always know who will be waiting for you on the proverbial oversized coffee shop couch when you walk through the double doors. And the finales of these worlds typically involve the dispersal of that cast, those friendships, those romances, and an abandonment of the place they all held communally identified with and revolved around.

The title refers to some vague emotional space we all inhabit post-evacuation of those lovely and tender situations. Whether it was due to a gradual distancing or abrupt divorce. Finding oneself in a strange present tense, very adult and alone. An afterlife that follows small accidental heavens we once stumbled into and thought would last forever.