Mountain Club are a trio of local musicians who have logged a lot of time (several years, in fact) playing with a slew of past bands and projects. Singer/guitarist Ross Kurtis and bassist (and beard specialist) Brent Mosser have been playing music together for nearly 20 years by now. They wrote together, performed together, toured together, grew up together...

The last two years, Mosser & Kurtis have been writing something new as a two piece (with Mosser on drums). When they found Evan Starr last year, it started falling into place. They finished up six songs and decided this was it: a new band, a new adventure. They called themselves Mountain Club and started gigging around Detroit late last Winter.

Time Waits For No One... What an apt title for a trio of players savvy about the scene and how all this banding and rocking stuff works. Akin to a group like Destroy This Place (or even PONYSHOW,) Mountain Club's knows their way around the indie-rock courts by now, so that gives their sound a refreshed, upbeat vigor, a cool kind of confidence like a steadier, surer hand upon the handlebars of the bike as it jumps the next riff-ridged dirt hill and sticks its landing into the next crescendo. This is the tight dynamics that come with a group that has honed their sensibilities for inherent spontaneity of their post-rock inclinations.

Mountain Club know how to get some massive punch from a minimalist make-up; reverberating riffs match the drums in the verses as the bass sets a driving groove in "Ocean Floor," the first single from Time Waits For No One. Kurtis' voice has a nice melodic whip to it and it's effective when it rises to the ebullient choruses, like a surfer upon the crest of some combustible guitar surges. 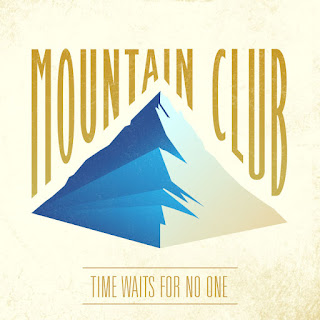 Mountain Club's album release show is Friday, Aug 21 and it, like Time, waits for no one!!
It'll be at The Loving Touch (22634 Woodward Ave, Ferndale)
It features Javelins, Ryan Allen & His Extra Arms, Monument Monument and Hawk & Son And it starts at 7 pm

A new single, "Knocking On Pavement," is at once both spacious and clustered, spacey and atmospheric yet jittery and ready to explode... You can hear more from their main site.
Posted by jeff milo at 12:40 PM