Height's always been this marvelously understated wild card for me. He's as much outlaw/folk-singer to me, as he is a hip hop emcee. The production on his tracks come packed with great grooves and staccato beats, but then there's these guitar trills thrown into the mix sounding like straight-up late 60's psychedelia. 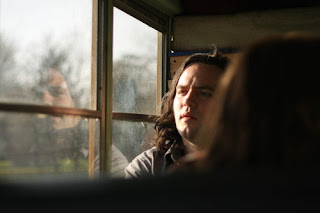 The Baltimore-based lyricist/performer (and subtle scene-builder) has an everyman's voice, this mid-range thing with a bit of a drawl to it that evokes a departure from the typical braggadocio bombast of rap and sounds almost more like a spoken word artist reading rustbelt poetry. Let's call it post-apocalyptic blues, serrated with ambient metal, gothic-country, and hip-hop's blunt eloquence.

I know I usually type about Detroit or Michigan-area bands, but Height's a close ally of Mister, from Passalacqua, (also known as Bryan Lackner, who used to stay down in Maryland, way back when...) Height and Passalacqua had an inspirational run together a couple years ago with a Rap Round Robin tour, and a couple stops in town, here, has steadily endeared Height (otherwise known as producer Dan Keech), to our Michigan music scene.

Enough talk from me, let's here a song...

Height Keech releases one of his most eclectic, fully realized albums to date this week, titled Mind Moves The Mountain. Keech revives a few songs from his 2016 EP Unending Blaze, here, adding in darker and more meditative rock/rap outings like "Trust No Blues."

What I've always loved about Keech's performance, and his vocalization, is that the core emotion behind it, whether love, passion, or, as I can sense with "Dead Rider" and "Trust No Blues"--anger, is always just barely restrained, but never overpowers the evocations. I can listen to some of these tracks and they bring me catharsis in what all too often feels like a post-hope world. That there is such stability to that melodic half-growl of his, that there is such a low simmer to those guitars, that the beats often feel like the beginnings of a march....that gives me some hope again. Trust no blues.
Posted by jeff milo at 5:25 AM