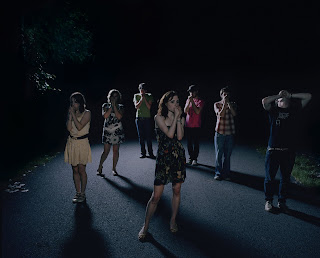 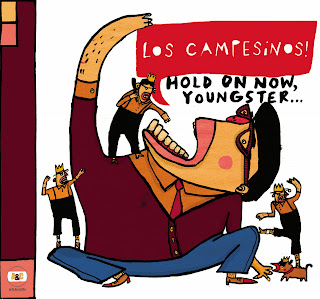 Hearing the jubilant basement sock-hop sound of this album creates the effect of the reading of its title as sounding like a raspy octogenarian drawl that places a condescending, cautionary hand on the boney shoulder of the sound’s gaunt sprout, only to quickly be brushed aside as the upstarts square off with their elder in garish defiance – as Los Campesions!, though they can often conjure a soft, sweet twinkle of dandelion seeds through the rays of rainbows, can simultaneously shred any ill-presumed naivety and cause even the most prudishly dismissive (as is the risked reaction of such a youthful, poppy and, as the word’s already been suggested so inevitably, twee) to sit up, take notice and respect this sneering/philosophic, bright-eyed/world-weary septet of Welsh-spawned, barely post-college, exubero-rockers.


In two years time, these talented Cardiff University sprites jammed some demos inspired by musing prog rockers Broken Social Scene and have since already toured their butts off, signed to a label, released two EP’s, finished school and now, their debut full-length ‘Hold On Now, Youngster…’ hits the shelves with pulsing beats, whirling blip keyboards, brazen glockenspiels, soft meditative strings, beautiful blurring motorboat shred guitars veering in, over and around boy/girl vocals sounding respectively like the chip on his shoulder chap who was first to figure out high school was bullshit and ran away from home and the impossibly beautiful artsy college girl who reads Tolstoy and always looks before she leaps.


The urgent, driving energy of the album exterminates complacency – it makes you feel lazy for sitting still. The energy: if it isn’t celebratory then it is searching, and if it is not searching then it is evading. Sometimes celebratory for the sake of youth, freedom, simplicity, love (“You! Me! Dancing!”), or searching for answers to the great question of love and relationships (“Knee Deep ATP; “This Is How You Spell…”); or evading the oppression of home-life or a technologically advanced yet still crumbling world (“Death to Los Campesinos.”)


The ever-rousing pace and sugary joviality of the sound may come off as a jolted Belle & Sebastian or a less flamboyant, sample-less Go! Team, and it may make the aging indie-rocker fan who lived through some of the glory days that the Camp’s are re-galvanizing (see: their splendid Pavement cover,) but this album holds so many disarming, profound poetics and unfound gravity that it may make even the old codger who cautiously speaks the album title to think it over and listen to what they have to say – because these youngsters seem to know where they’re going.
Posted by jeff milo at 6:25 AM