~
I like that I’m having trouble pinning this down…
...this cacophonous symphony, a conjoining of so many different flavors all rushing up to the meeting point in slightly off-toned acerbic shreds to blend together so beautifully, albeit with this spooked-sort of groove enmeshed in the outer-lining. 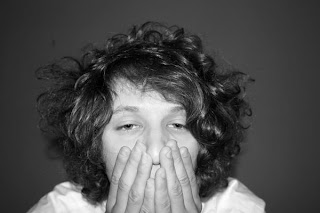 The arching roar of the bass and the waltzy drums and the woozy blare of the trombone sets a macabre romanticism - there’s some kind of darkness lumbering backstage, just beneath the hazy folk-y exterior…as the sound struts and shuffles, twirling parasols and waving its hands either in poetic lament or declarative joy – in some fatalistic display, some gothic release that conjures penniless bards stepping over puddles in the burning glare of crowded Bourbon Street – these freak-folk humanists, as much playing their instruments as they are dancing with them – catching the wind and submitting to the sway.
To see the Marthas live is transfixing for a number of reasons – the distinctiveness of the sound simply being one, but the other being the complete lack of self-consciousness amongst the quintet – they do not look nervous; there’s no tick or twitch of glances thrown out at the crowd, in a way you almost feel disregarded…but you can’t deny the beauty of their display nor deny the slight feeling of voyeurism you may receive ‘cuz it starts to feel like they aren’t here to impress you, that this is just a peek into the basement window of their spilled out rehearsal space. Indeed, the Marthas, as they revolve around the stage switching off instruments, rarely seem to exchange those nervous or confirming between-band glances or nods you’ll often see on stage mid-song. Like 5 individual spinning tops miraculously keeping from crashing into each other and all coalescing with the same visceral noisy melody, led by this shaggy squinty soul pounding the piano or gutting the guitar. 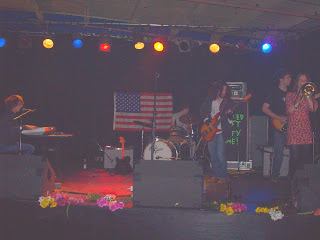 Mick Bassett, 21 years old, a U of M student, a former player in the notoriously youthful The Dollfaces, has been developing his new project over the last 2 ½ years and honing his own murkily poetic and hard-boiled lyricism through jazzy interpretations with a fractured beat-sensibility and a stormy mysticism. There’s a trembling trill to his smoky nasal coil…as though his words could crumble at any minute in a hair-raising scream, rising like a rolling storm, rattling the portraits off the walls and blowing open the strain glass windows to the dark rainy night outside…

The live presentation itself, there seems to be this inherent looseness to it…

“Yeah, that’s cuz it absolutely is…” says Mick. “We don’t really plan anything when we play, we just go up there and…play. I like that, because I feel like I’m being a musician and not just repeating what you’ve already done…I’d rather just play.”

As featured here – Thomas Matich provided his portrait of Mick and the Marthas from a feature penned back in April of this year – since then, the band has gone on a 3 week through the east coast, down through Washington D.C. (where their van windows were smashed in—causing them to lose their GPS system and having to improvise trash bags for windows) they then looped down through the south and back up.

With Tom, you spoke of moving past the Whirlwind EP…
“I’ve been ready to do that for a long time….I’ve got the skeletons of [new] songs done and the chord changes. We’re in the first stages of [new recordings.] I think next week the band is going to try to get together…”

Mick said the band would have gotten to work sooner on a potential new full length recording, but efforts had to be devoted to the tour. Which went smooth – and saw the band’s strength and chemistry grow even stronger, Mick said…aside from the unfortunate van break-in…it was quite the adventure.