Champions of Breakfast (pictured below) - with Carjack and Edie Sedgewick 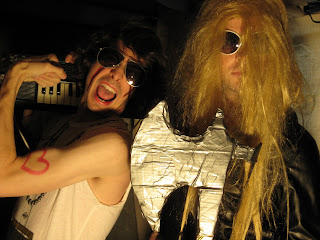 ~~~~~~~~~~~~~~~~~~~~~~~~~~~~~~
and, something a little more random...
maybe an album review?...
...
Deerhunter (played last nite at the Crofoot in Pontiac...I didn't go, but here are scattered, wandering thoughts percolated from listening to the demure daydream-fuzziness of their latest release, Microcastle): 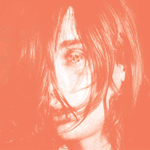 Perceptions of Atlanta-based quartet Deerhunter have become as clouded as their sound’s surfeit of feedback fuzz and dominating reverb-cloaked guitar moans. Coverage of the stormy-shoegazers through 07 and 08 has mostly focused on either their inimitably intense live shows’ rousing, but often graceful (in a way) volatility. If not that, there was the blogged-out-soap-opera of singer/guitarist Bradford Cox, the latest of a line in new age twisted genius (albeit with his own distinctive stamp) – with his overly informative rants unintentionally stealing a lot of attention, thus straining original member guitarist Colin Mee’s enthusiasm to the point of departing.

Well, if not that, majority of reviews seem to plod on with mish-mash grab-n-pull rhetoric on the challenging, arty, punk-bent-noise slides and swirled self-destructive psychedelia of their first few releases. And now, ironically, and maybe post-modernly, I’ve fallen into their same trap. "Weird. Avant-garde. Challenging!"

The system, the crazy upside down overly stretched run around fake-empire of music journalism…the system, whatever it is, seems to be – you need a “buzz” just to get started. Just to get your invisible foot inside the non-existent door. The amorphous keyboard-set masses (of listeners) digest your sounds like shunted sheep from Pitchfork and then you’re in - you’re in the high-walled spark spurting, ruthless tilt-o-whirl of the internet music world.

You develop your own identity there, after an album or two, maybe an EP (for Deerhunter, last year's Cryptograms and the Fluorescent Grey EP). Then, the peanut gallery of the bloggers wield their axes of malleability and fit you into a square peg, with a swarm of adjectives that start forming popular perception for you based on repeated phrases clarifying your sound.
In Deerhunter’s case, “feedback, drone, storm, punk, deconstructionist, indie, shoegaze, avant-garde,” etc etc…basically most of what you’ve already read from above. We pick out the bands clothes for them, pack their lunches and send them off to your playground.

But, you get to the point, finally, the put-up-or-shut-up point, where your honeymoon ends and people expect something monumental, (or at least something worthwhile). Forget that you, as a band, may not have asked for this attention, you just wanted to do your own thing. Maybe you’re the Strokes or Interpol and you don’t ever really deliver beyond the sit-and-roll-over trick…or maybe you’re Deerhunter and you (whether stressing or not) tighten and hone and surprise! You deliver. You shut everybody up. You show your depth, you try new things, you don’t look back.

Don't let a blog or an online music magazine tell you what to think on this one...we're gonna do a lot of rhetorical stirs like: "50's-pop-revivalist" (which is true if you listen to the waltzy one-two-three percussion and smooth sunny chord progressions...) which is all drowned out by "weird fuzzy noise" that sets the typical shoegaze millieu...leading us to more rhetorical stirs like My Bloody Valentine-name-dropping or referencing latter day Radiohead aesthetics... who knows...


All I can say: this record is strong and creepy - and it's got some pop.
Posted by jeff milo at 5:54 AM