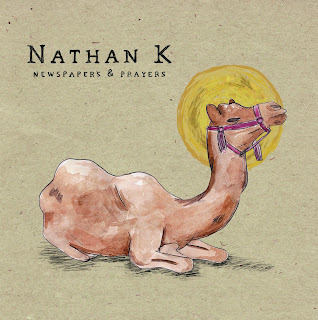 Nathan K is passionate, he can be very personal, and his folk-heavy debut full-length feels pure – it plays like a veiled autobiographical documentary, framing himself-in-song in third person set-ups as ponderous buskers dizzied by street shufflers or ruminating poets at sunrise, often calling out into various voids, questioning himself, his path, seeking it out in friends, in science, in nature or in Jesus. Over his golden sonorous acoustic guitar, warmed and blushed with pianos, bass drum booms or the spindly bleat of a banjo, Nathan K.(lages) coos out portraits of stretching highways you can feel under his wandering feet, or more ethereal pathways into the curiosities of memory; we are taken down the streets of his home in Ann Arbor, we discuss the explosion of the sun and what lies beyond, and we stuff our hands in our coats and arch our shoulders as we traipse into the forthcoming winter. His plaintive nasal voice and knack for dressing songs with such a pleasing elegance, yet so minimalist in layout – like the simple power of the backing players of prancing pianos, bending bass grooves or shimmering mandolins as in the title track, prominently, but then, also, balanced throughout.

Nathan K has been to Nashville and back and around the country and back again – his neo-folk style is that akin to a Mountain Goats, an Elvis Perkins or an Ann Arbor contemporary Chris Bathgate or Charlene Kaye, highly schooled in various genres, a taste for the orchestral and contemplative, and an ear for a nicely flowing acoustic-led folk style. It’s hard to tell if the highly inquisitive lyrics are naïve youth or a beyond-his-years preternatural philosopher, wherever he’s going, the passion is palpable here.
more info - Current Magazine Interview
~ 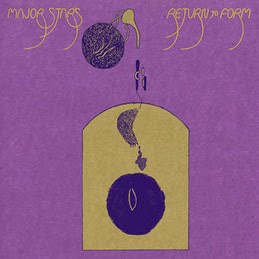 When veteran metal/psych-rock collective Major Stars came together in 97 to forge their unabashed wah-heavy hard trounced rock debut, they called it The Rock Revival and had the first two tracks (of only four) run nearly 20 minutes. While they draw the curtains, take a bow and throw some charming hooks and throaty barbs your way with the marching pound-popper “Better Stay Down,” they make that return with the staticy-howls and distorted roars of a staggeringly wavy and declarative solo that burns atop a jam-ready percussive roll for nearly more than four minutes, with the characteristically instigative vocals barely able to keep pace before things calm down just past the five minute mark, “We’re goin back, we’ve had our way / no end in sight, no final day,” incants singer Sandra Barrett over those insuppressible mutant-growling riffs from Wayne Rogers. Major Stars continue to be bent on the steady demolition of the soul via grimy metal riffs, blue collar garage rock hooks, guitar solos seemingly akin with the swirling heroics of area-rockers yet so transmogrified by those ear-piercing distortions and vocals dipped into the soul of blues balladeers. Much like 08’s Mirror/Messenger, they balance their sprawling, spasmodic, pound-fest dissertations with a, not-quite-poppier-material, but quicker hitting garage-rock leaning brevity. For better or worse, every song goes for broke.

more info at Drag City
Posted by jeff milo at 10:25 AM