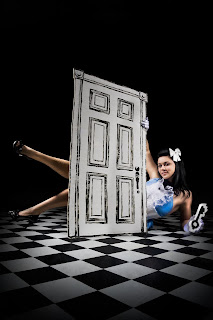 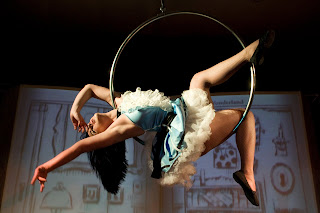 There’s blood on the floor, a burlesque dancer clad in baby blue to one side and an on the other there’s enchanting songstress belting a dreamy ballad dressed in a mouse costume.

“…who doesn’t want to climb into the rabbit hole and abandon this decadent and dilapidated wolves den we live in?” posits singer/songwriter Drew Bardo. “It’s going to be a New Year’s weekend to be remembered if you spend your time in Wonderland.”

The brutal with the beautiful, the scary with the soft…

…an immortal story pared to its roots in proto-psychedelia – the surrealist circus freak collective
of Theatre Bizarre rallied on the 5th floor of the Russell Industrail Center last spring to let loose their charming and disarming take on Alice's Adventures in Wonderland, culling together a wide-arc of unique talents, from burlesque, to exotic, to break-dancing, from musicians of the local rock scene, to artisans of the canvas and costume design. The cast and crew reprise Wonderland for three nights, New Year's Eve, Jan 2nd and 3rd at Hastings Street Ballroom.

Longtime show-organizer and Theater Bizarre stage manager Casey Miller found 60 seconds of free time one night to come out from back stage and watch the live onstage performance of Wonderland, the show he was directing, and grinned with satisfaction at the wave of energy (enthralled, fascinated, disturbed, disgusted, mesmerized), pulsing through the crowd, as Pend Suspension’s Daveyhooks and Kaz, as the Mad Hatter and March Hare, floated six feet up in seated positions, hooks in their knees and backs, teaspoons up their noses. 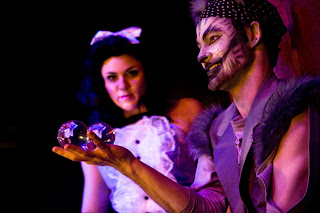 “I wanted it to be a trip,” said Miller, who has long admired Lewis Carroll’s classic tale of suggestive psychedelia and the liberating/frightening power of madness. “Every artist took their performance to another level.” Miller, who cut his teeth organizing/directing wrestling shows as Squared Circle Revue and Revolucha is an advocate of performances being social experiments – not only reimagining presentation (through Wonderland’s built-from-scratch stage with ceiling pulleys flanked with church pews) but as explorative dialogue between performer and audience – how will an audience react to an Alice-themed party with burlesque, vaudeville, pyrotechnics, and suspension hooks?

Miller admitted that he wasn’t sure many people would even show up – and yet, dozens had to be turned away some nights after it filled to capacity before the curtains rose. adds nuance to Miller’s “social experiment” by challenging he and McCombs to find a way to keep an audience energized with an overall wriggly craziness, while still seated in a theatre setting. 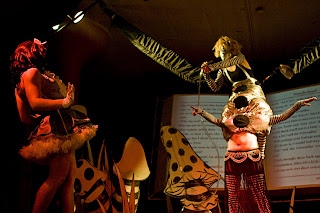 McCombs, who works in live multimedia performance with Los Minstrels Del Diablo, said he was excited to have the giant projected story book (a feature he developed with his cousin, Dunivant) be able to be seen by the entire audience, this time around, as opposed to some of the standing-room limitations of the Russell.

“It’s a growing project,” said McCombs. “If Wonderland is gonna live on and be a thriving production it has to survive in a legitimate theatre, ‘playing by the rules.’”

“It was a giant mystery whether or not we could pull all these elements and people together to make this show come to life,” said Bardo, who began writing with Ltief before dress rehearsals.

The presentation was classy, fairly traditional, but wholly head-spinning. A balloon dance represented ’s shrunken-state-entrance into her teardrops; the curtain closes and the White Rabbit (Miss Jessica Rabbit) shimmies across performing for changeovers. And, as the Rabbit drops his gloves in the original tale, Wonderland’s rabbit extends that into what Miller calls “the longest strip tease of all time.” Then the curtain opens and the striking, silver caterpillar appears surrounded by smoke – a belly dancer as the bottom half, eventually falling away for the bungee dancer on her shoulders to rise into a suspended butterfly.

“I tried to book it like a variety show,” said Miller. “They have to all make sense but they don’t have to be word-for-word-anything – here’s your introduction and here’s your exit and then you have your act. Do a little bit of action so emotion flows from your character and then, do your thing (be it song, dance, or more experimental), whatever it may be…”

Miller recruited these performers from all the unconscious field research he’d conducted by going to see their individual shows and thus befriending them. Much of Wonderland is giving each artist space to let their freak flags fly – but merely putting it in the context (costume, set design and concept) of Wonderland’s story.

Though it aimed for melting minds, it was still a traditional theatre experience – which was fresh for the more sideways approach of Miller (with wrestling and Theatre Bizarre shows). “There’s all different types in this show, and everyone was really cool. A lot of people kinda looked at me like I was crazy, but they just didn’t know what was gonna happen.” Indeed, trust was a key factor – the carnival of different performers putting trust in their imaginative orange-topped director, trust in the integral live band’s ability to keep the energy flowing through utilizing improv, and trust from Miller and McCombs (who admittedly saw Wonderland as their baby) to let considerable responsibility go into the hands of others, as the duo, with Dunivant, devoted themselves tirelessly to its production; for Miller, it was difficult but eventually relieving to welcome helping hands.

The performance was recorded in HD, with editor/videographer Per Franchell, and will be available as a feature film on DVD, for sale at the New Year’s weekend performance. Hastings Street Ballroom, like the show’s performers, was a place Miller had scoped long ago, dreaming of its potential; now he’s excited to bring the show to a traditional theatre environment. “But it can still feel like a dark dingy space,” Miller says, lovingly.

Indeed, the implicit star of the show is . “We wanted to bring a perspective to the (Wonderland) story,” said Bardo, whose Glass Orphans are preparing to release a single, the show’s opening number, “My Immaculate Mind.”

Miller and McCombs agree that, if the future holds more reprises and even an eventual tour of their wonderland show – then will help provide a learning curve for adapting to traditional theatres. “() is going to cure some of the environmental distractions,” as Bardo put it, referring to acoustics and vantage points, “though I will miss the crazy clown train.”

This time around, Miller is satisfying a personal vendetta against the often anti-climactic bust of general “new year’s parties.” Rabbit-hole tumblers will enter the Wonderland gallery, curated by KT Andresky, featuring numerous pieces inspired by Carroll’s story. Singer/songwriter Audra Kubat will perform in the gallery with a plethora of toy instruments. Local chef and pastry-artist Sarah Lachowski will be cater the gallery with staggeringly decorated confections made to be interactive with the story, mushrooms, roses, caterpillars and overall deliciousness. As midnight approaches, all will gather at the stage to receive their champagne – the countdown begin leading to an explosive celebration of indeterminate messiness and only then do we officially start the “madness” of the performance.

Bardo praised the “litany of creative minds” dedicatedly working together to “pull off a show of this caliber: “…from Casey & Jason producing the show-- to Me & Rabeah writing all the music and creating the sonic mood of the performance-- to Roxi as Alice-- and all the other actors and dancers- to the talented Jamison- Ted- and Libertine doing the many voices of the show-- to Kate designing all the costumes-- to sound guy Nick-- John Dunivant doing all the stage art and design.”

An initially “run and gun, underground, guerilla, rock-n-roll style” production, evolving into an ornate and mind-blowing adventure in burlesque, vaudeville and psychedelic music, settles into the Hastings Street Ballroom for, as Bardo puts it, “version 2.0”

For pre-sale tickets – check out Showtime Vintage (5708 Woodward) or online at: http://whoooareyou.com/