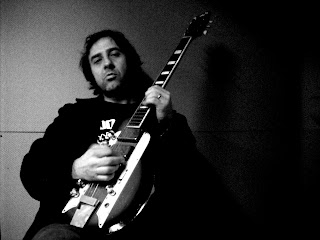 Gregory is known round these parts as a musical maven – with tenures in soul-shocked garage rock institutions like The Witches, The Dirtbombs and his own glam-tinged space pop bands like The Stepsisters. But the often-clad-in-black cognoscenti-of-the-creepy has been developing his filmic talents for years, through small productions. Meanwhile, his Oak Park basement holds not only instruments but stacks screenplays he’d been hoping to develop, once he found enough time off from the road.

“And that was the thing,” Troy said, “the idea was to try doing a Stepsisters movie.” Originally, Gregory was developing the movie for a label – which made it logical to try “a band movie, and usually those things come out so very after-school special.” Troy relied upon his brother Todd (magnificent, cast as Troy’s landlord) , also a videographer and producer of wedding films, utilizing his skill behind the camera, but also to bounce ideas off of him. Todd helped his brother realize/actualize his surrealist vision, an inverted take on “the band movie,” on the streets, bars and houses of Hamtramck with local actors.

In order for the pair to pull off the production, it seemed most logical to follow “the band” as they return home from a long tour – and the exasperating and exciting rigors that are there waiting for them. For the three leads, Troy, Teri-Lynn and Mary Alice (singer/guitarist, bassist and keyboardist respectively of The Stepsisters), it involves Troy’s dealing with alcoholism, paranoia, insecurity and dread in the face of getting over a girl; while Teri-Lynn (“the happiest of the three stories”) butts heads with her delusional, high strung roommate (wonderfully played by Aphrodite Nikolovski) while slowly developing a romance (Mike Walker); while Mary Alice longs for solitude but has to deal with the sudden return of her mentally-imbalanced sister (Annie Paras) who disappeared 11 years ago and is now seeking a haven from her cave-set life of sleeping in alligator’s blood with a rifle between her legs.

Quirks abound, and the dialogue’s sharp – Troy’s absent roadie, it turns out, was shot for stealing a turtle; ...human-beings are overrated…but they know how to have a good time, don’t they? Cameos abound as well – the late soul singer Nathaniel Mayer portrays an ominous angel, Dirtbomber Mick Collins is a mad, rambling pianist, Electric Six singer Dick Valentine is a jittery Canadian disc jockey and representative for Troy’s mental demons, and veteran avant-garde psyche-pop artist Kim Fowley acts as quasi-narrator, “the voice of doom.”

Todd and Troy’s tastes range from classical silent-era, to cheap horror, to French new wave – the results being a captivating balance of painfully identifiable cracks of the human consciousness, exploded into varying degrees of abstract montage. The brothers used their chemistry and collaborative brainstorming to work around equipment and budgetary limitations – still making for quite the squiggly psychedelic darkly comedic, spaced-out haunted drama. Kudos to the cast, as well, with 90% non-professionals, for complimenting the aesthetic. Todd said he looks forward to working with his brother again. Troy, meanwhile, will experiment on a Web-soap-opera with actor Ted Raimi and, inevitably, get to work on more movies, more albums, more work with the Witches, more writing.