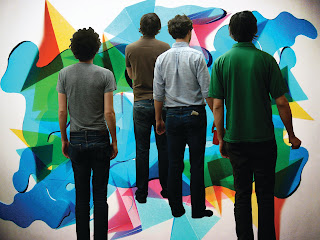 Zoos of Berlin - performing at the Crofoot's Brother's Bonanza - 3/20

Dupuis, quipping a boast of wearing Dolce Gabanna, playfully responds by self-applying his “aristocrat of the band,” as Zoos of Berlin huddle around his recently installed sound board, adjacent to their homegrown (professionally-equipped /built-to-specification )studio.

They join Oblisk, Prussia, Manna & Quail, Designasaur and Ragged Claws, for a free show in the Eagle Ballroom – simultaneously acting as Zoos kickoff to their first major tour (w/Child Bite) and as a birthday party for one of the most valuable, industrious proponents of Michigan’s art scene, Crofoot General Manager Phreddy Wischusen.

“We finally got the monkey off our backs,” keyboardist Will Yates referred to their first full length, Taxis, self-released last year (after about 4 years as a full line up, with bassist/singer Daniel Clark, but songs had lingered for more than six years back to when Clark and Naud first collaborated.) “Now,” said Yates, gesturing to the studio, “it’s a new beginning. We’ve been doing more, both writing/recording here in the studio and in terms of booking shows; we’re moving faster.”

Zoos of Berlin, "Black in the Sun Room" from Adam Lonczynski on Vimeo.

“(Taxis)’s songs were the result of years of playing, each hashed out over days,” said Clark, “and this time songs are coming all at the same time period; we’re able to hear what we’re doing quickly.”

The notably experienced Dupuis imparts the vitality of “initial” reactions; better to avoid “over thinking,” or being “perfectionist.” The more steady, or meticulous developments up until Taxis “made us into a very tight unit,” Clark reflected. “Having gotten that foundation, it’s easier to be more spontaneous.”

“I think it’s more learning to leave room,” said Dupuis, both the soundboard and a creepy 4-ft-tall Santa statuette set behind him, noting the benefit of being able to write/record at the same time. The band is settled, cozy and confident – whereas before, Taxis was recorded in rented space inside the Russell Industrial Center; a former auto-parts shop that the boys had to clear, clean and install Dupuis’ impromptu (yet still sufficient) set up.

The plate reverb, an unassuming-yet-ominous box in the next room, adds an encompassing textural effect that essentially adds an entirely new (invisible) instrument; acquired by Dupuis, Naud claims, “…it might be one of the greatest things that ever happened to us.”

Since Taxis, the band has seen a rash of international-internet-born attention; they’ve also been busy dreaming up music videos while they hunker down in their souped-up space for a healthy round of experimentation/writing/production.

and about those tour dates with Child Bite