Old Empire: How To Make An Entrance

Old Empire doesn’t know exactly what their “sound” is…and neither do I, but maybe that’s the point.

There’s always this idea of a band having its own kinda sound. For singer/songwriter Gabe Dodson, it was less about trying to fit a sound or a trend or a style and more so just about writing good songs.

“Make good songs,” he says, “and just exist in a tradition. Listening to music, riffs make you feel good in their release, the hooks, too. But, if then, you can take just a shred of truth or something that resonates with you about being a person, however dark, then that stays with you, that song, you hum that song through your day, with those words and, man, life can be difficult. Most people experience more failures than successes in life and you need some salve for that. Music and art in general has always been a salve for me in that way.” 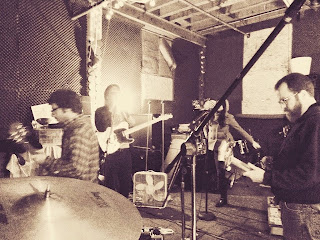 With Old Empire, Dodson’s been surviving with a sincere proclivity towards writing 3-minute mini popera’s and singing these catchy, jagged blends of proto-punk and sun-blasted Brit-pop in a city otherwise known for its blustery garage rock for several years now. He’s been backed by the rhythm section of Mark Biermann(bass) and Michael Oak (drums), guitarist Charlie McCutcheon and singer Laura Rock for the last few years, with an EP (Tall Ships) that started streaming properly online earlier this year and a forthcoming album called How To Make An Entrance.

“We have lots of speeds,” Dodson said. “We like all the emotions. We wanna have all the feels.”

Dodson’s as wise as he is a wisecracker. He’ll let a lot of quips slip out but he’ll also directly quote Greek philosophers and experimental film directors. He attained his degree in American Studies from Wayne State and once struck out with Kerouacian aspirations to write the next great American novel.

“You can take the Beatles for granted sometimes, like when I say they ‘wrote the book…’ But the people who wrote my favorite chapters in that book, like Lou Reed or John Doe, those guys had the degrees too, it’s just, much like those guys we just got hung up writing poems over music.”

So let’s talk about writing the book. That’s an ideal place to start with an Old Empire song. Dodson often writes as though he’s approaching the penning of a short story with a complete narrative. How To Make An Entrance bursts with pop-rock ebullience, but the lyrics unveil a thought-provoking morality play, in varying narrative tenors evoking nostalgia, self-depreciation, soul-searching stares into the mirror and, above all, sincere takes of hindsight’s stock.

Songwriting, for Dodson and Old Empire, can be used not only to sift through hindsight, but foresight as well. He’s quicker to praise David Berman (of the Silver Jews) than he is the typical deities like Dylan. “(Berman) has a similar keen awareness and observation, and great poetry. He’s talking about the world that I exist in now. It’s about context, for me. I love the Jim Jarmusch quote about originality, how it’s non existent and that authenticity is invaluable. I never believed in originality. The Greeks called it mimesis. We all learn through copying each other.”

But it all comes back to existing within a tradition. And if he’s following Lou Reed or John Doe or, especially, Ray Davies, then Dodson and Old Empire’s tradition is a sugar-coated gut punch of a pop song, the one with a melody that won’t leave your head and with words that’ll haunt you just enough to get you thinking a little harder before you just lose yourself in another ear-pummeling amp-blown evening of headbanging. These are songs to take to heart. They’re fast and some are fierce and they’ve got plenty of gusto guitarsmanship shredding through it, but they should be taken to heart, particularly with the warmth and interplay of their harmonies, the keen sense for boy-girl vocal dynamics traded between Dodson and Rock.

“The best songs, the best lyrics, come when I’m being the least hard on myself,” Dodson says.

“When I just sit down and talk about things, that’s when the turns-of-phrases flow and I stop scrutinizing whether I’m using too many fifty-cent words. Laura reminds me to just take a breath and let it flow, tell the story you want. She’s got such great harmonies, too. Singing has been her passion her whole life. She’s given me confidence that I’ve never had in my life.” 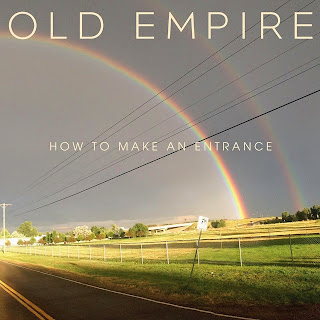 Confidence is what led Dodson to stop waiting. How To Make An Entrance had to come out and it will be out next month! He hooked up with Kevin Pachla, founder of New Fortune Records, to get the album pressed to vinyl.

But confidence also comes from the Old Empire as an ensemble. “Mark and Mike, they were, since the 90’s, as teenagers, playing as a rhythm section. Their feel for each other is amazing. Charlie always gives the song what it needs. He’s like Johnny Marr in the verses and J. Mascis in the solos, just a natural.”

What How To Make An Entrance demonstrates, is craftsmanship. Pop song craftsmanship, but still… No need for panicked overreaches into trip-hop psychedelia or backwards-inversions of baroque-pop. No need to clutter the composition with obfuscating distortion or crib too much of a twangy surf rock signature. Old Empire, here, figured out how to make their own entrance. There’s a cathartic crackle to Dodsons voice and a poignant sweetness to Rock’s, there’s a playful shimmy to the rhythm and a tightly snapped hook to singe off the verses. And in the middle, like three act plays, we meet fully formed characters, cast with lyrics that say just enough, dropping the dots down for us to connect it all, until we hear something that sounds eerily familiar to our own experience.

How do you create your own identity? What do we make of all these things we know that we actually don’t know we know and all the things we think we know that really aren’t true at all.

“Between (Queen City Quandaries) and Tall Ships, I decided I’d start writing more about myself. Being sincere is definitely a corny thing,” Dodson says. “But, I wouldn’t have it any other way. Songwriting is definitely the best way I know how to relate to people. Whether it’s the people in my band or in the audience. I’m high strung, I can talk a lot and I talk fast and I like to talk about things that are not small-talk things. So songwriting, singing, then, is social. That relationship, finding that through songwriting, that drives a lot of my thinking.”

“So… defining our sound?” Dodson pauses for a second. He does talk a lot, and swiftly. But here, he pauses. “I’m so far inside it… that’s for other people to define. I just want to be earnest and connect with the listener. I want to tell a story that resonates. I want to socialize with people. By the time I’m done writing, I want to make sure I haven’t necessarily painted any character as the bad guy or bad girl. It’s just people doing stuff. Living. L-I-V-I-N, as they say…”

OLD EMPIRE perform at NEW FORTUNE FEST II
You can pick up How To Make An Entrance on vinyl there. It’s available for download May 26.

For more information, follow NewFortune Records
Old Empire perform in the mid-afternoon at NFF II
Posted by jeff milo at 9:10 AM