First, some thoughts on the Beekeepers latest: Beekeepers II
“What are these thoughts? Where are they coming from…?”

That saxophone comes in with that organ and I’m already feeling haunted. Nightmare jazz a-go-go and circus rock groove… The Beekeepers II

I’ve said it aloud, once or twice, that I relish the opportunity to write about the Beekeepers music.
The local quintet has been conjuring sublime pop storms and a strange breed of punk-twisted Tin Pan Alley standards for more than seven years now. Now, it’s typically not a fun task to attempt “writing about music” because it’s not only a futile effort to elucidate, in words, just how an instrument, whether keys, drums or strings, can swell in such a way with its eerily bent tone to match the more honeyed hum of a human’s voice… Or, worse, the music you are trying to write about lacks depth or liveliness…

Not with the Beekeepers, however. Depth? It’s a never ending rabbit hole, a never ending, ever-winding swirly slide…Liveliness? The Beekeepers evoke a sense of disorientation akin to stumbling onto the stage in the middle of an off-Broadway musical, a basement production lit by strobe lights with backdrops redolent with fresh latex paint, and you’re dodging elaborate cardboard set pieces and actors dressed as trucks pantomiming motorboat-sounding engine noises… At least, that’s what I see when I hear this  music…

If I haven’t yet gotten the point across, the Beekeepers spark a stimulating strangeness; the imagination of this music is marvelous…with meandering lyrics teasing and tip-toeing around rambling saxophones and shuffling jazz percussions, a spacey, soulful organ and a guttural punk guitar. The melodies match the melodrama and gravitas of supernatural operas and Tolkien-esque odes. Danny Elfman and Tangerine Dream and Low might each love a song like “Distant Lands,” while Mark E. Smith and Ornette Coleman and Mark Mothersbaugh would love a song like “Normal Dressed Man.”

There’s theatricality in each note, be it the wobbling wail of the organ, the excitable mustering of those drum fills, or the dynamic emoting of those vocals. And the time signatures shift whenever they damn well please; from a steady shuffling beat, to a sharply hooked refrain, to an inebriated-sounding slithery spill…. And then you have a song like “Billboards,” with its free-for-all bridge, inviting each player to improvise whatever kind of mischievous noise they can meld onto the piece. 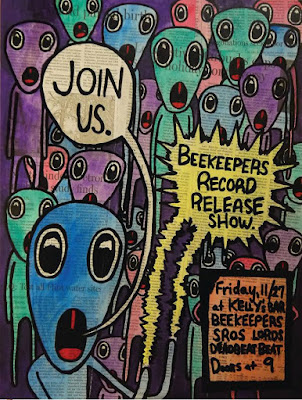 But then there are true ballads here, too… like “Evil Is Real,” a poignant and unsettling show-stopper with a vocal delivery that almost demands a single spotlight for that vital 3rd Act Opener… Is this a musical? The pianos settle like dust after an explosion, the bass groans like a toad and the drums are so mindful of when to patter and when to pummel… Is this the soundtrack to a hallucinogenic dream you’ve been trying to piece back together?

Wait… Is that a hip-hop beat on the closing track? Is he actually just singing about gum that got stuck to his carpet? WHO…? WHO ARE the Beekeepers?

And why do they keep making music that drives me delightfully delirious?

And then some thoughts on Deadbeat Beat’s latest: Only Time Will Tell


Alex Glendenning and Maria Nuccilli started making some indie-tinged power-pop together way back in 2007 as The Decks. And it probably embarrasses them for me to bring that up, since they’re demonstrating a lot of progression (and mastery of a delicate discordance) with Deadbeat Beat…But the roots that they laid down with The Decks, a swaggering kind of Kinksian tear into garage and bubblegum pop with a bit of noise-pop and surf-boogie, have blossomed with the thorny sweetness of Only Time Will Tell. It’s way too easy and reductive to call this punk/pop since there’s something a bit more subtly psychedelic going on in tracks like “When I Talk 2 U” and something more groovier and grungey going on in a song like “I Wonder.”

Are there earwormy bah-dah-daahs and swirly-slide guitar riffs? Are there splendid harmonies and strutting beats…? Yes…so call it pop, sure. Are there sheets of dissonance and a broken radiator-esque hum of feedback? Are there backhanded barbs and unsparingly graphic scene setters in the lyrics even as they shimmy along a half-pipe slaloming melody? Yes…so you can hear that punk element coming through. Ya know… maybe we should just listen to “I Don’t Wanna…”


I know Maria doesn’t have any vocals here, but I still think it’s her most dynamic drum part… And there’s confidence as much as there’s catharsis in Alex’s voice…Not to mention the stellar guitar solo at the 1:07 mark… But there’s always a growl underneath the grin. 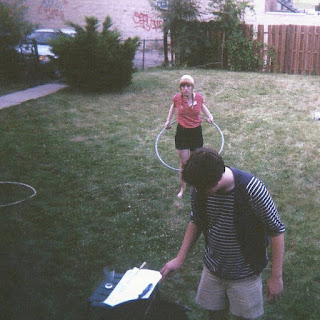