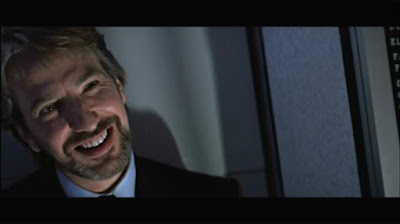 Today, a considerable portion of Alan Rickman's fans will primarily mourn the loss of Prof. Severus Snape, But in my estimation, from age 5 forwards... Alan Rickman was the quintessential "bad guy." When my parents finally got cable and we could get HBO, I probably watched Die Hard and Robin Hood: Prince of Thieves 35 and 26 times respectively between the years of 1990 and 1993. So, before he charmed everyone in Truly, Madly, Deeply, or showed his truly majestic Royal Acting Society-chops in Sense & Sensibility... or before Snape and certainly before Love, Actually...,

He was THE bad guy. But he was so grand at it, he brought panache and profundity to the role of the villain. That voice helped, of course, (aptly cast as "the voice of God..." Dogma). But I think it was those eyes. Could any actor stare through you like this one? His gaze came right off of the celluloid screens of cinemas and could shoot through an audience like lightning to the sternum, make you shrink down in your seat and feel a nuanced kind of dread... Not the typical dread a monster or a slasher or a maniac or some Marvel machination would instill in you; no, it would be something much more subtler and much more effectively stultifying.

That gaze, either as Hans Gruber or as the Sheriff of Nottingham, greeted you, the viewer, as if you were, yourself, in the shoes of the hero... You would imagine facing off against this presence, this aura, this voice, these eyes, and wondering if you could beat him with your wits. And that gaze would always curiously compel you to conjure up your own stores of spirit-spraining self-doubt. How can I beat this guy, when he's so cool, calm and collected? When he seems so confident, himself... He didn't have to yell, but when he did - that made it much scarier. He had such composure.... He was Snape before Rowling even wrote page one of the Sorcerer's Stone.

With respect, to a guy who could bring that same kind of crystalline composure and brilliance to any role... even something as fun & cheesy as CBGB.