Things are a little more rough around the edges for Ryan Allen on his latest album.

"This time, I guess I really connected with my inner-Bob-Mould or something..."

After 2015's Heart String Soul, it sounds as though Ryan Allen's seen the light. And illumination, literal or metaphoric, might be harder to catch when you're working on all your songs late at night in a basement, of all places.

It's a Tuesday; your son's off to his bedtime and you've got the pinch of hours before midnight to hone a song or two toward  near completion before the day-job calls in the morning and you have to reshuffle your brain again to compartmentalize all these kinetic, coiling melodies until you can get back to that basement. But after a year, what you'll wind up with is something like this...

On Sept 30, Ryan Allen & His Extra Arms release his third solo album, Basement Punk (Save Your Generation Records); performing at the New Way Bar, with FAWNN and Lawnmower. 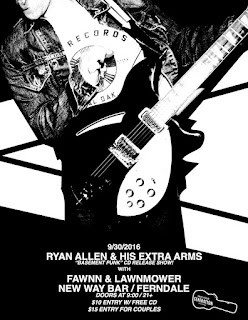 "A lot of the first shows I played, early in my life, were spent in basements," says Allen. "And all my band practises too, even if it was in my parent's basement. That's where things start; basements... ...I mean, almost every significant musical moment that I've had, in terms of sparking ideas for songs, is derived from being in a basement, somewhere..."

Early on, he was in an agit-pop group with his brother, Scott, called Red Shirt Brigade. The band that broke him into the indie-rock world was Thunderbirds Are Now!, and they contemporaries of others from the curious batch of early 2000's math-rock/indie-punk & post-emo outfits like Les Savy Fav and Enon, so they did some extensive touring... Allen has played on big stages in front of hundreds of people before... But there was never anything that equaled the nuanced thrill of being crammed in a basement.

We're talking about jostling into the performance space provided by the Vegan Grocer in Pontiac during the late 90's, or another DIY venue in Ann Arbor called The Pirate House. The finespun feral spill of those urban cavern concerts cultivated a blur of integral experiences of nuanced inhibitions that would inform Allen's musical mindset.

"I'll never forget when Red Shirt Brigade played at The Pirate House. It was with Ted Leo, Lovesick and Q & Not U...in a basement! I remember feeling uncool walking into this hip basement...until I see Ted Leo down there helping out with this sledgehammer. He's getting ready to knock a wall out of this house in the basement so that they'll have more room for people...because there was going to be up to 100 people at the show. Seeing this person that you'd already looked up to (Leo) at the time, down there, with a sledgehammer...just...being a basement punk! He's knocking a wall down in this house just so that we can play a show."

I said earlier that it sounded like Allen had seen the light. I think it's more that he just never lost his way. Or, that he never really left the basement. I mean that as a poignant metaphor, of course, because clearly Allen's been out in the world. He's currently in another band, Destroy This Place, which has been storming along for about five years now (with three albums already under their collective belts). Before that, as Thunderbirds Are Now were tailing out, he married his lifelong sweetheart, Angela, and now their son, Emitt, is starting kindergarten. Life has happened. Even if all those precarious, poorly-lit, poorly-ventilated basements remain in his heart.

Last March, he could have very easily released a Dad Rock album... Not that he would want to or intentionally do so... Heart String Soul wound up being the most tender of taunts, a way to divulge and yet dare any doubters. He made album that discarded any pretense and put his life story into jangle-heavy, hand-clappable, fist-pumped poetry. Imagine that, sincerity and nostalgia, honest emotions and no-second-thoughts over vulnerability, rocked into a power-pop album. It's was like: worry about sounding candid, instead of sounding cool.

"That ability to be fragile and fierce at the same time...that soft center with this rough outer crunch, all of us have that, to a degree, as humans, but for me, playing with that duality in an organic way, not doing it because you think it'll give you some kind of image or some identity. To actually be you, to be the person you are, there is a sincerity to me, but there's also that, kinda...caution... Or, I guess what I'm saying is, I may not want you to get too close. That's why, what I've done with Basement Punks is use the volume, the fullness of the sound, the loudness, to make you step back a little bit, but still keep these lyrics that can pull you closer. That ebb and flow...that's what makes the music that I love and come back to..."

There's fragility behind the noise. The self titled song on this album is a 150-second cycloner with crashing hooks and spidery fret scrapes curtaining the soaring solos. "Gimme Some More" has these effusive guitar hooks that build towards these pounded minor-keys under the chorus that aren't so much riffed as they are hammered, corresponding to the resoluteness of the lyrics, snarling with the moxie of unhinged youth but cooled with the outlook of a higher age, a second wind at a time when you've got more sense, a fresh store of serotonin shoots to the brain but you're wiser about how to use it; this is the wild-sounding rock you make when you're no longer naive, but far from disenchanted.

And then there's "Alex Whiz..." Allen is very aware of his inclinations towards late 90's post-emo intonations and mid-90's underground-rock scruff. Instead of only dabbling with it or blending it with six other half-genres, he's inhabiting the specific rock sound he finds himself most drawn to... Wearing it like a band t-shirt. And that's what makes the stuff sound so authentic, or...as we said: sincere.

Allen said that he had to make Heart String Soul, almost as if it were a sonic keepsake, an overt memoir, through music. But while that album told a lot of Allen's past, Basement Punks seems to be meditations on the present and the inevitable arrival of the future. In that way, with the energy of the guitars and the self-assertive resoluteness of the lyrics, this is the sound of one from the basement punk species sliding closer to a more secured self-esteem with one's place... Yes, I'm in a basement in the suburbs...But, also yes...I'm going to pour my heart into these coarse rockers and curled melodies...

"That's the overall snapshot of what the record is about... Basement Punks... It's this acceptance of that being a good thing and being okay with that. People have aspirations, they want to play big venues like The Filmore and they want a ton of fans and they wanna sell a bunch of merch. Which, I'd never turn down any of those things, but at the same time, you come to this realization of it being okay if none of that happens, or if it used to happen and it just doesn't, anymore. I'm gonna be alright, where I'm at..." 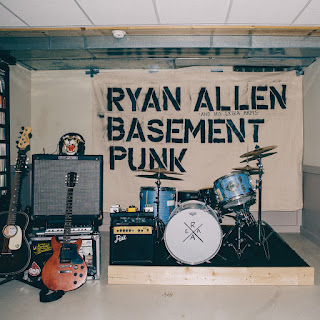 "In any trajectory or vocation in life, the older you get the more rewarded you usually are, except for in music...and, that's not any sort of revelatory statement. But, some older bands, and I'm not naming names, but they just look silly, or there's that feeling like they should just stop, their music isn't anything relevant anymore. But...."

"But then you have a guy like Bob Mould or J. Mascis (of Dinosaur Jr), or John Davis of Superdrag, or even the band Beach Slang. Davis is in a band called The Lees of Memory. He's got a family, a job, maybe he can't tour as much. So what? Doesn't mean he can't crank out a fucking great song! And Mould? From his solo stuff, to Sugar, and I fucking loved Husker Du. I am into that idea that somebody can still sell (music) as they continue on. As a musician, you can still make something viable, no matter what age they're at..."

The overdue acclaim that came Beach Slang's way for 2015's The Things We Do To Find People Who Feel Like Us, was a particular inspiration for Allen, as he got started on Basement Punks. (Beach Slang singer) James Alex is another I can relate to, he's also a father and I'm closer to him in age and he still wants to go out there and fucking kick ass and take names. I have to believe that that band is "big" now because of that last record's particular perspective, the perspective that he has now at this point in life. Somebody making the exact same music who might be in their early 20's might not be able to put the same spin on that..."

Some of Bob Mould's very recent songs could have been written by a 20-something-year-old Mould, because the energy is still there. The enthusiasm for rough-and-tumble power pop is still there for Allen, as well, with Basement Punks. But like Mould, they've both got broadened perspectives.

Meanwhile, Allen still performs and writes with Destroy This Place. "Which is an incredibly loud band. That's another reason that (Heart String Soul) was a softer record; I wanted you to have to turn it up a little bit and hear it, closely. This time, with Basement Punks, I wanted to shake that up and make a bit more of a sonic statement. A lot of what brings me back to records by Sugar, or Lemondheads, or Dinosaur Jr...and a lot of it is the fullness of the songs, acoustic and electric combined. The last record had no guitar effects... But this one, I brought them all out and said: 'Let's fucking do this...' Last time I almost tried to make an indie-rock version of a Tom Petty record; but this time, I just wanted to make a fucking rock 'n' roll record about me and my life!"


***Backing Allen up for the live incarnation of the Extra Arms is drummer Sean Sommer (of Destroy This Place), bassist Ryan Marshall (of PALACES), and guitarist Mike Gallacher (of Monarchs).

facebook.com/ryanallenandhisextraarms/
Posted by jeff milo at 5:37 AM