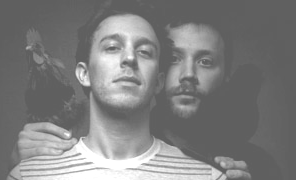 I'm particularly excited to write about this band, because they're literally buried treasure.

They aren't playing a release show anytime soon; they aren't promoting themselves to you over social media, and there isn't any other blog sharing their sounds yet...

Lost Soul Music is the debut album from Bobbi & Weed  and it came out last month on a new local DIY label called Sophisticated/Professional Records.

Lost Soul Music is a time machine and a wormhole at the same time. Nostalgia pangs from tumbling country ballads and harmonica-hazed folk ditties will percolate, but there’s also more cerebral, and cinematic sweeps of baroque-inclined experimental pop trips, and psychedelia-splashed singer/songwriter odes. Bobbi and Weed have a knack for a toe-tapping beat and a wistful melody, but they also seem to really love the dustier instruments that the too-cool rock kids have left behind for their fancy fenders. There’s a heavy heart and a strange soul, here… There’s an uncanny charm here. There’s Bobbi and Weed…, here!

Produced and written by Tom Bahorski (Pink Lightning, Irrelephant, The Ashleys) and Steve Olshove (The Ashleys), this debut album marks the completion of the first collaboration between a pair of new living mythic music makers, embracing the mythic monikers of Bob Bobbi and “Tumblin’” Tom Weed.  The eclectic duo explores themes of finding acceptance and surrender to the backdrop of sparse acoustic guitars and psychedelic swirls of ghostly Motown inspired harmonies.

Lost Soul Music is psychedelic blend of cosmic-country and singer-songwriter craftsmanship; the album marks their first fresh collection of new material together since the release of their 2013 single, "The Lonely Bob Bobbi (Main Theme)"

Parking lots and burned out lights
Watch the willows as they weep
Trains of empty cars, shadows bright and bleak
And the sounds from tuesday evening
Are on my mind

Bobbi & Weed set an easygoing pulse. They let the richness of pianos and twangy acoustic guitars reach their deserved capacities of evocation. It's a record for the ponderers at dusk, the twilight strollers, the early morning searchers; it's a record for slow rocking chair rests and calmed appraisals of a horizon glowing with out-of-reach-adventures. The Band. Leon Russell. 1970's Dylan. Portions of Van Morrison. Some Allman-vibes too... This is the kind of country you go to when you need soulful restoration.

And I'm streaming the whole damn album on this post because I want more souls to join me in this country. This quirky, mellow, groovy country.