Detroit's own Stef Chura is capping off what's been a break-out year with a special, very limited run of pink bubble liquid-filled coke-bottle clear vinyl versions of her debut album, released by Fonoflo Records. This trippy, artful incarnation of her album, Messes, includes a full color double-sided 12x12" insert with lyrics and a portrait of the singer.

Oh, and she was on Daytrotter, recently...

And she's going to cap off a tour with The Drums by appearing at this year's MoPop Festival in July. 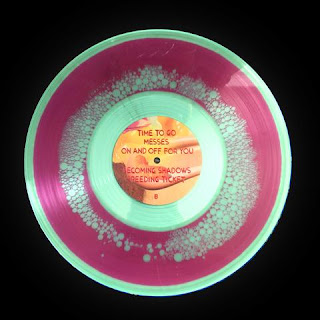 The Messes artwork, given that characteristic dreamy-dayglo hue by artist Molly Soda, lends itself to this splashy, glittery aesthetic that Fonoflo presents... I also think that "Faded Heart," a single that didn't get as much attention as "Spotted Gold," has this perfectly fitting wavy/hazy tonality to not only the guitar effects but also in Stef's vocal performance; again, I'm just trying to abstractly connect that to the surfy/seafoam vibe of these new vinyl pressings... (Hey, way back before Messes blew up, I actually talked about "Faded Heart" over at Paste).

You can find some of this vinyl at her merch table on tour, or you can order it here.

These versions are available on her tour with the Drums (tour dates here), but Fonoflo has some copies available for sale. The liquid-filled version is selling for $99, while the glitter version sells for $70. Both augment Messes' Molly Soda-designed sleeve nicely.

ALSO, in case you missed it, here's an interview with Stef, by Amanda LeClaire, host of WDET's Culture Shift, from back in April