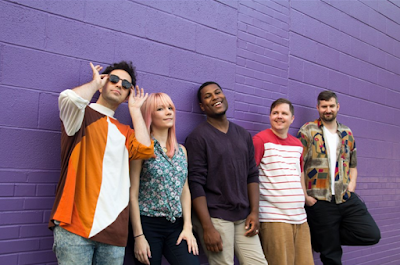 Tomorrow night, local quintet Two Cheers are performing at PJs Lager House, part of the 2nd annual Corktown Strut festival. The evening's performance doubles as an Album Release Party for their latest, Rollick (which will be available digitally/officially on July 14th).

A couple weeks ago, they released the first single, "No Good at Talking,"  but TODAY, we're continuing our Thursday Singles Series with another new Two Cheers track called "Too Late."

Two Cheer is led by singer/guitarist Bryan Akcasu, an Ann Arbor native who started this project several years ago while he was establishing himself as a songwriter/performer out in L.A. He returned to the Detroit area a few years ago, having completed/released the first Two Cheers album while based on the west coast.

The current lineup includes Austin Lutzke, Carlton White, Megan Marcoux, and Owen Bickford. They followed up 2015's Splendor with a three-part series of singles, and this is back when I first properly featured the group on this site.

There is simultaneously so much effervescence, and yet so much heavy emotion, to most Two Cheers' songs. The rhythm has brio and bouyancy, the guitar hooks are instantly locked into brain and those dreamy synths just coax you to glide away with them, over the curvatures of catchy, bounding melody. And it surprised me that Akcasu admitted to, at least in the earliest stage of his songwriting, a reluctance to share or a shyness to perform, given all that palpable feeling and energy that's audibly evident in his vocal performances (either on record or on stage).

But those melodies often have a shimmy, the drums have such a punch, the bass has this slick groove, and the guitars interweave these sleek threads with the synthesizers to forge a cinematic swell across the top of most tracks. 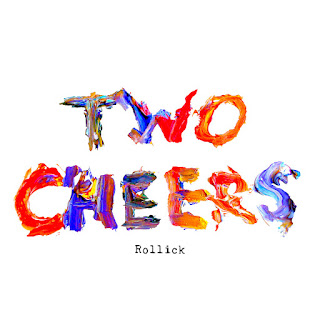 Those echoey synth whirls catch you immediately in "Too Late." And then a driving beat kicks in through the verses that vault into these charming guitar tones cresting backward with just the right amount of bracing reverb.

Akcasu's emotive vocals and the middle/high registers he hits in an achey croon have often caused bloggers, critics, or whoever else, to suggest an influence of 80's new-wave pop. In his youth, he would assemble several mixtapes with the complex/catchy post-punk & dream pop jams of bands like New Order, Cocteau Twins, Siouxsie & The Banshees, The Church, The Sundays, and more... But there's a need for catharsis. There's healing power in music. And, as Akcasu told me in this latest interview, its something he needed to embrace, if at least on Rollick...

Bryan Akcasu: It has been something I have embraced so far, at least during the first few years of Two Cheers’ existence. People tell me all the time that I sound like Robert Smith and look like Morrissey, which I think is a blessing and a curse because it’s kind of a cool comparison and people usually mean it in a good way, but it’s also not something I actually strive to achieve — it’s mostly biological. And it does get a little tiresome because as an artist I want to be breaking away from things that have been done before and pursuing a sound and style that is totally originally. I think with each release I get closer to that.

With all the changes I’ve had in life lately, it’s kind of a comfort to bring back a bittersweet chorused-out guitar tone or a lush synth string patch that calls to mind simpler times, or reminds me of my mom or childhood in general. 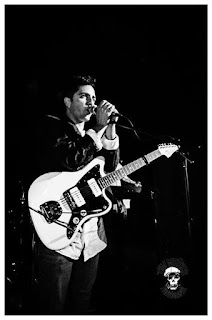 Can you talk about the ways in which Two Cheers, and the songwriting process, have helped you get through a turbulent two years? Has music come to mean more to you, or come to attain a different meaning to you over the years?

Akcasu: I think music has the power reconnect your mind to a part of your soul that can help you heal yourself, if that makes sense. I find this really hard to comment on, because it gets into really personal territory — but for me music is like a religious thing, it’s only an expression of my spirit, the way I live, my philosophy and the way I see the world. Those are the things that really helped me get through the past few years, and the things I derive meaning from in my life, but Two Cheers is only part of that, a manifestation of that. In that sense, music itself has come to mean less in some ways, but at the same time it plays a more poignant and specific role that it used to. It doesn’t consume me like it did when I was a teenager, but it’s no less potent.

That said, something about the songs “Hinterland” and “Rest Of My Life” seem very mysterious to me, as one came to me in a dream and the other is made up of little details, quotes, and notes I wrote into my phone during my mom’s last days. It’s like I didn’t write them, or I couldn’t write them, so some invisible hand took the reins and did it for me. That loss has been really hard to process, and being able to assemble something coherent out of the chaos of my thoughts and feelings surrounding that was kind of a relief.

Talk about what was difficult, or rewarding, or fun, or intense -about making this record. Singing a lyric like "...this is the rest of my life..."  is heavy when you think about it, outside of the context of a pop melody.

Akcasu: I put that song “Rest Of My Life” last because I’m marking this moment in time — the end of the record, the end of a hard year, the end of an era maybe. Things in my life, and things in my heart, have changed so much since starting the record, and I think the record captures that to some degree.

I always say to my wife, “Good news! This is the first day of the rest of my life!” and she laughs because it’s kind of a joke, but you’re right, it’s also one of the heaviest things you can say if you mean it. The rest of your life might be 70 years, but maybe it’ll be only a few days, we just don’t know — and I want to always live with that in mind, because it makes me more sensitive, more aware, more conscientious, and more grateful. If there is a thread linking these songs together, or all Two Cheers songs for that matter, it’s that sentiment: I don’t have to take my life for granted, or the people around me, or my environment. This is all I have, this one life, and I am going to invest an ultimate meaning into it.

There's a lot of emotion, existentialism, honesty... in the lyrics especially. What gave you the comfort/courage to embrace the more forthright/emotional delivery--lyrically speaking

Akcasu: It partly comes back to what I want to listen to when I listen to music — pure humanity, raw emotion, unfiltered heart. I don’t think humans invented music to convey irony or display their whit or technical skill. So much so-called indie music is too intellectual for me, or the emotion is too hidden and guarded. Maybe it’s unfair to be scrutinizing the motivations behind a song, but what I’m interested in is what bubbles over from inside people and spills out into the world, into their art.

I have very powerful emotions about things I really care about in my life that I have to channel into something, and when I sing I become possessed by it. I have to be fearless about it if I want to make music for people like me who have the same emotions but for whatever reason don’t have a way to express it. I sing about things like confronting death, learning to be devoted, celebrating friendship, and rediscovering personhood… Things I consider crucial and really fire me up. My only regret is that I have often couched my message in poetic language or vignettes in order to restrain myself a little — I’m not sure if I should do that anymore. Maybe I’ll just come out with it in the future!

On Friday, fans can experience Rollick during Corktown Strut. What was the creation process like, what was the experience of making it like...?

Akcasu: Rollick was written and recorded 100% in my basement here in Michigan. We started doing some jams in February of 2016, and we had about 20 or so interesting ideas by June, and that’s when I started to make songs out of the best of those ideas.

For this record, we wanted to make the songs a little more diverse than they were on Splendor, like explore different moods, styles, and arrangements, but still have that element of instant gratification and lyrical depth that our older songs have. We also wanted the influences of the new group to show through, and harness our different musical interests. Meanwhile, I started out with a vision for the kind of vibe the album as a whole should have and the kinds of themes I wanted to explore to link the songs with a common thread, but as the year went on that became harder and harder because of things happening in my personal life. But I like how the album expresses that instead: you can really hear a range of genuinely different moods and narratives. So, it’s kind of bi-polar, kind of a variety show — but life has been like that lately!

In terms of what influences you... what do you listen for?

Akcasu: ...What I listen for and what I try to capture is sincerity and a glimpse into the innermost spirit. The music I like best is from-the-heart; music that has a willingness to be emotional, exposed, raw, and individual.

In terms of...what you do, when you approach songwriting... What's that like? And what's your relationship to pop music? Do you embrace it?

Akcasu: I try to write really catchy, infectious music first and foremost: music that on first listen can pull anyone in with a good melody, riff, or beat. In that sense, it could be considered “poppy”. But a lot of pop music just stops there, like the lyrics are kind of an afterthought or the arrangements are hackneyed. Maybe that is what is problematic for some people, like hipsters or people that want to be challenged intellectually. I don’t think Two Cheers stops there though, either musically or lyrically; I like making music that is deceptively simple in that the first impression is that it is easily digestible but upon repeated listens you can find layers of texture and complexity that are working behind the scenes. If anyone thinks Two Cheers is just disposable pop music, I defy them to read some of our lyrics!

What's up next for Two Cheers? What's the goal for the rest of the year?

Akcasu: My goal right now is just to get as many people to hear this record as possible and have a fun album release show at Corktown STRUT on June 30th. That said, I do have some very definite ideas where I want to go musically and lyrically, and I’m already starting to work on new material…