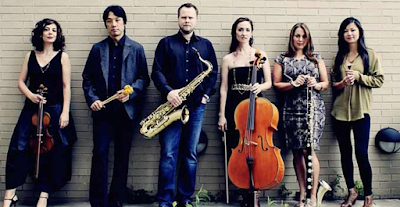 Some of the music..., most of the music, that you're listening to... is safe. Most of the music you're listening to attains whatever quantity of its elegance by way of restraint. Or, rather, a reliance...upon traditional structure, common tuning, pleasing timbres, and arrangements that feel familiar. Don't get me wrong, some pieces of music, be it rock or electronica, can feel propulsive, evoke exciting velocity, and stir up your adrenaline... But you still know where you'll land. You still recognize the terrain.

I don't want that tether. I want something exotic, I want a sound that bursts with several colors, that sounds almost alien! Something that can' be framed, can't be contained. Something that might not even keep a downbeat, and gives me dance moves I can't replicate.

This is the 10th annual Strange Beautiful Music Festival from New Music Detroit, hosted at Trinosophes on Friday, the DSO on Saturday, and the MOCAD on Sunday. (More info).


A marathon of ambient, avant-garde, meditative, noisy, traversing with great whims of emotion that change up a phrase or a melody with sudden shifts of time signatures or new keys delicately diced into a hook that creates a third or fourth movement...

Alright, I got a little high on the stranger stuff... At its heart, this festival is that celebrates innovative composition and gracefully daring performance styles. Coordinated by New Music Detroit, the Strange Beautiful Music festival augments their dedication to breaking new ground in music, and programming live music events that can showcase the virutosic talents we have here in Detroit trying to push those boundaries and break through.

Highlights include DJ Rebecca Goldberg spinning acid-techno on Friday night at Trinosophes, New Music Detroit performing Steve Reich's famous "Piece for 18 Musicians" on Saturday at Detroit Symphony Orchestra's Cube, and continuing at the MOCAD on Sunday where you can see Detroit ennsemble Saajtak.

Also, the incomparable Onyx Ashanti will be there to blow your minds with the epitome of futuristic innovations. There's a tribute to Pauline Oliveros, the explorative jazz of James Cornish, and the all-out noise ceremonies of Wolf Eyes.

For full information on all three days' worth of lineups, visit New Detroit's site. Or, you can find more info at the festival's facebook page.  Things kickoff Friday at 5pm. Find tickets through the DSO.

Here's New Music Detroit from a few years ago at a Strange Beautiful Music festival.