Ancient Language (Interview) + "At Last We Are Nothing"

Ancient Language are releasing a new batch of sonic worlds (condensed into 5-minute scopes) on June 2nd and the newest single is streaming below...

This song sets a pulse for your breathing, with chimes and a calming bass essentially stretching things out and letting in some oxygen; then the drums kick in and set a stride, the piece moves forward and the viola comes in... This is what Ancient Language have always been best at, steadily adding more sonic pieces to the collage with a carefulness so as not to overbear the ears, but to harmoniously bring you into the next dream state (verse, bridge, etc). After the second chorus scoops you up and evokes a sense of floating, you could snug those headphones to your ear and key in on the subtleties of any element and find a quiet richness - if it's the breathlessness of the vocals, the cherubic simplicity of the looping synth melody, or the variably expressive or sparse booming hum of the bass....

Founding member Christopher Jarvis said that the recording process for this one was "...started with (brother/bassist) Zach and I writing demos in Arizona and sending them back and forth to Matt (Beyer)." (And this goes back almost two years, now.) (Beyer) would add something, we'd add something or take something away, sculpting the songs as they took shape. It was actually really exciting to work this way. I'd never given up so much control before. (Beyer) wrote so many amazing melodies and progressions. When Zach and I moved back to Michigan we continued writing and recording together, eventually adding Abby(Abigail Jaske) on viola. The whole thing was recorded in (Beyers)'s basement.

Continuing in their character, this is music to sort of pause you in your daily anxieties and hustles--with contemplative lyrics that make you wonder just quite how that surmising is delivered... At last, after all our worries and wanderings, we are but  nothing? In sort of a zen way? Or is it like, At last! with excitement, as though one had been anticipating this all along...yes, we are nothing. But this song is not about worrying where we'll end up and it isn't existentially casting off what significance our actions may have "in the end," it's more of a song about being in the moment.

"I think my approach has shifted away from the production aspect," Jarvis said, "and now I'll focus more on melody and emotion. I'm trying to get at something honest and truthful instead of just making music that sounds cool or music you can party to or chill to or whatever. The music I like is music that makes me feel something real, even if it's challenging; so that's what I try to do."

And then he uses that beautiful word, "maximal..."  "...My music has always been pretty maximal so creating music for 5 or 6 people wasn't that much of a challenge. We went in writing these songs with the intent of playing them live without a computer, so naturally the arrangements were a little more minimal at first but we ended up adding a lot of instruments in recording so I think it ended up being just as complex anyway."

The best kinds of post-rock odysseys will do that - even though it's a complex meshwork of musical elements interweaving together - it is about a peacefulness... A sudden throw into sharp relief of the very big picture that is, you, me, and everything...

And yes, the album title does come from the Danish art of comfort... "hygge," at its core is about an approach to life that is about recognizing and living within a moment of peacefulness. "We're all searching for wellness and peace in our lives," said Jarvis. "And it's so fleeting but I think music can be a way into that..." 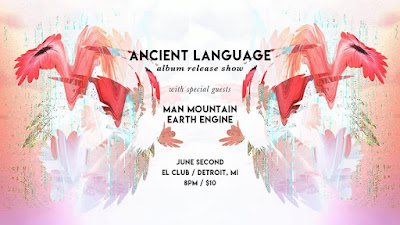