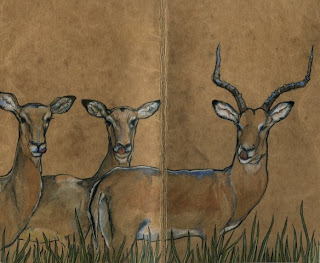 The Belmont hosts "Exhibitionist" on Tuesday, April 27, with metro-Detroit based painter/sketch-artist Alana Carlson - presenting "What Are You Doing Later?" -
This is a presentation of new work from Carlson, who recently had a show at the Russell Industrail Center (examples of which can be viewed/appreciated here). Her displayed art will be joined, aurally by a handful of musical performances from the burgeoning atmospheric/psychedelic space-rock bastion of Detroit (culling strongly from the arms of the Loco Gnosis label) including Jura - Indian Guides - Forget - and - Extra Large Childe (the latter features Carlson herself, along with Mike Ross of Red China-fame).
Posted by jeff milo at 6:55 AM