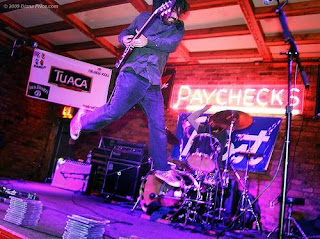 
So… here’s an interview/catch-up with Ypsi-based murky mod power duo Jehova’s Witness Protection Program/ Through 2007-2008, these dudes made it westward for occasioanl Detroit shows – characteristics included a rather clean cut, non-descript look mirroring the same types who bring The Watchtower to your front door, yet their identities were (and kinda still are) also a bit veiled by their black shaggy head fur, beard and hair combined.

The band's sound is rife with raw wailin guitar riffs and hollow slammin percussion punches, this sort of raw bare bones thing that seems to sputter its own buzzsaw sparks to nicely dress the soundscape with a scuffed psychedelic thing.

JWPP will have their debut EP, aptly titled, Knockin’ – re-released on Loco Gnosis (find it here: locognosis.com) which will include 4 new lives tracks, essentially making it a full length, upgraded to “LP.” The live tracks come from a January Elbow Room (Ypsi) set, that, according to singer/guitarist Anthony Anonymous, give a much representation of how the band sounds now, compared to three-ish years ago, when they really got started (though the duo, with drummer Jehan Dough, have been playing together for more than a decade, here and there).

““Anyway, Anywhere,” is a pretty straight forward song as far as JWPP goes,” Anthony said. “…No looping, fairly consistent rock vibe and an ‘Oh-yeah’-chorus. There’s an obvious nod to The Who, one of our favorite bands of all time.” Whereas, “Walked” is described/distinguished by “pretty heavy layers of looping throughout most of the song, no chorus, probably a little on the darker side…” 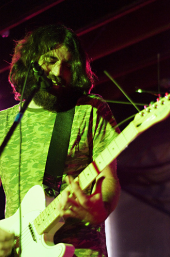 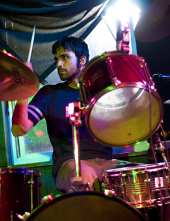 Since Knockin, Anthony’s changed his guitar sound considerably, switching from the “clearer” telecaster sound for a Gibson SG that “seems meatier and fuller” all-around.

“Jehan and I,” Anthony said, after 13 years of playing together, acknowledges “an obvious comfort there, that could make it easy to fall into staleness and not move forward musically. However, we’re really happiest when we are testing ourselves; with Knockin we really just needed an introduction: a set of songs that we could play live and record so that we had something to get started with, as a band.”

This time around, on their forthcoming recordings, “We’ve had more time to develop them, time to play and sing the songs, cringe at bad ideas, and go back to the drawing-board. Each of these new songs has been deconstructed and reconstructed to be the most rewarding for us and for the listener,” with liberal looping, Jehan contributing vocals and not being afraid to embrace a few experimental/psychedelic trickery/atmospherics.

Back to the two of ‘em: “We are totally brothers. We’ve always been close throughout all the years of playing but, when you’re a two piece, you have nobody else to deflect issues or help prove points with…it’s always just us….and…that means we support each other as well as possible, but we’re also quick to test each other and push buttons to get a response. There is definitely a healthy does of smart-ass…in this band.”

“Jehan,” he continued, “when I can count on him to be solid and on-time, I can go to a place that’s way more like freedom than effort; where the music just flows and there’s very little thought about what I’m physically doing. And, lately, that happens way more often than not, which feels good and serves to open up more avenues for us to travel.”

As Spring proceeds, the band is hoping to lasso their way around Lake Michigan, hitting up with their friends Me And My Arrow. “They are a great band who we’ve had the pleasure of playing with in on their last two tours.” From there, they hope to wind back, , and Western Michigan-area and back again to Ypsi.

Also coming this Spring, not entirely connected to JWPP, but somewhat – is the… (and I almost feel like I should indulge onomatopoeic trumpeting fanfare noises) the smoking ban in bars, throughout the state of . Fucking awesome – no more laundry after concerts, no more cheap and guilty febreeze-cologne applications to my clothes!

And thus, May 1, JWPP play the Elbow Room to celebrate, or, at least, acknowledge, said-smoking ban. “I’m a firm believer in freedom,” Anthony said, which is telling, because it’s also the title of JWPP song. “I think people should be able to do whatever they want with their bodies (and minds) without criminal consequence.”

“But…public smoking seems different to me as it’s been proven to be harmful to those around us when we smoke. That being said, I travel pretty often and have spent lots of time in NY city and throughout and it’s really refreshing to be able to go out and see a band or grab some food without having to smell cigarettes. I guess I see both sides of the argument, but I feel like the new law make sense.”

“So, to be fair to all of our friends, on April 30, we’re playing a show at the Lager House that I’m sure will be as smoky as possible…” (and following with the smoke-free Ypsi/Elbow Room set the next day).

Lager House has Sharky and The Habit and The Err; Elbow Room has Ghost Lady and Glori5

more info here and here
NEWS - JWPP will release a 3-song batch of songs (recorded with Brandon Wiard) on June 18 at the Elbow Room - with Black Lodge - more info
Posted by jeff milo at 12:10 AM