As my extremities thaw and the coffee screws my mind up into some cerebral pep squad leader, I squelch the neurotic tinges in the back of my head, those echoing from the upper bleachers of my skull's gymnasium, that seem so eager to remind me of how fleeting these little words are, that I type out across the screen... I remember, always, to just live in the moment...

Don't question the validity or profundity of posting a new song by this group called Sex Church that I just started getting into, this morning, via a recent album review...and, hey, yeah, I definitely dig the track enough and I think you will too... ...Will I be rocking it in a week? Will I be stammering to you about the band and the song, next weekend, when you catch me at the bar?

Maybe. Likely not. But enjoy it now for what it is...

But then... how's this for a not-so-random MP3 posting - Detroit-area based solo ambient-pop composer Andrew Remdenok's latest work:
Hallo (Andrew Remdenok Remix) by andrewremdenok
...who, it turns out, just played the Magic Stick last night... glad to see the former-Prussia-bassist is starting to bring his own stuff out, now. Hopefully we'll see/hear more soon...

~
....Moving on: News from two adverse ends of the Industry spectrum this morning...Swedish-based bit-torrent site The Pirate Bay, a known facilitator of "illegal" downloading, is now using its evil influence to help promote independent artists. Sounds pretty cool, actually. It now offers a free advertising service called The Promo Bay - (read about it here) - as TinyMixTapes reports: "many out there in the vast ocean of artists are more concerned with getting their output to the people than they are with having their output stolen or pirated..."

Of course, a provocative entity such as The Pirate Bay had something to say about the whole SOPA/PIPA backlash this week...striking back against the outrageous lengths politicians will go to defend copyright, suggesting perhaps that, likely, palms have been greased... That's the whole thing of it though, ain't it, the big labels and the big Katy Perry types are having their intellectual properties stolen..., right?

But many in the music industry have given up on album sales, royalties, etc... as TinyMixTapes continues: "By creating a community of content creators who openly support the free distribution of their work as a means of exposure that will lead to people buying concert tickets and other merchandise, it increases the acceptance of such practices..."

It comes down to quality of product, TMT says, vs. quality of marketing... And marketing is what artists like Katy Perry (via EMI) has in spades...
...as NPR's Marketplace -Planet Money reports this morning...
Listen to the story here.
Read more here...
...breaking down the nuanced expenses of producing a blockbuster album like Teenage Dream that saw Perry become "the most played artist on the radio..." Producers, songwriters, cameos, artists' advances all add up - and then there's the cost of getting these songs on the radio in the form of "special promotions, free merchandise, and presents..." Or, what sounds to me like payola, alive and well.

The story above breaks down all the various pockets in which this money ends up - and why the inconsistent "batting average" of major labels is the big reason the music industry is struggling. 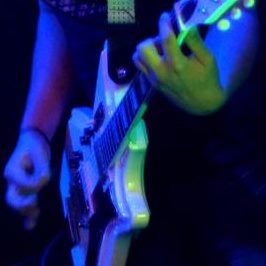 That all said... why don't we hit the town tonight and see, hear and be invigoratingly rattled by some live local music?

This group roared out a tripped-out, sludge howl of a set inside the Library a couple weeks ago... ...I turned to a friend, mid-set, and found myself wanting to say the words: "post-grunge..." to describe what I was hearing...

It seemed to have the alluring gloom of the later-mid-90's-pre-reunion era Soundgarden, but also the cerebral, tingling bend and hazy-barrel roll of Spacemen 3...

Do they sound like any of those bands? No, not necessarily. You're reading a blog, fercryinoutloud, so be wary of how subjective I/we, can be... But, maybe if those two noted bands were playing a game of tennis...and Superbomb was the ball that kept striking off the netting... ....wait, I'm not sure where that metaphor's going...

Some Things by Superbomb

It's just got that growl, in the guitars and the vocals, that distant-rolling-thunder-esque muted ominousness to the drums and bass, and things are spaced out, often slowed down - this is music that wants to take it all in during the verses and then swing its axes into every branch, wall or car hood during the choruses...

"Post-grunge?" I found myself chuckling after I said it... Stopping myself. What does that even mean? What does any of that even mean anymore? We have such a fixation on classification so that we know what we're walking into -when we approach a piece, a work, an artist... We crave a whiff of familiarity, to have an inkling of what to expect, which can dictate your enjoyment or rejection ...I'm trying to work against that.

Like when Jeremy Peters tells me that Eastern Michigan's jazz radio station still plays "mostly post-bop..." my mind instantly leafs through a range of artists from John Scofield to Branford Marsalis to maybe even some later Charles Mingus compositions... And then Peters tells me about the extensive work put into that kind of genre classification by Allmusic.com-staffers like Greg McIntosh or Fred Thomas... I thought, in my younger college days, that that would be something I would love doing day-in and day-out but...I worry now that it would drive me crazy.

I have enough time of it describing bands here...

So I'm trying to get post-post-labeling things... and embrace the New Weird. People can get touchy about classifying art - or music, what-have-you. Shouldn't it be that it's an uncontainable element, something that can't be framed or described-to-a-tee? In a world where we're made so-aware-of art and art history by those whose task it is to document it, (this influenced that, this era begot that era...) it's important to remember the very minute flurries and excitations bubbling between the beats of any song, anywhere...

Doc Waffles rightly compared the artist's venture to that of Ishmael's frightening and enlivening adventures aboard the Pequod in Moby Dick... "...it's an essential metaphor for the artistic enterprise, to probe the depths and encounter what's down there it may be your source of livlihood or of great terror," (said Doc).

I've got to get back to probing the depths with the same literary flourish as Melville...

The way that people go to great lengths to classify music, movies, books--any form of entertainment, really--is always simultaneously fascinating and irritating to me. It is what it is. There's some utility to be found in classification. It's a verbal shorthand. Sometimes it turns into pseudo-intellectual one-ups-manship. Sometimes it's purposefully acidic and pejorative. Again, classification is what it is.

That having been said, none of the three of us in Superbomb shy away from the dreaded "G-word" from the '90s, even as those like-minded artists from that era actively *did*. Whatever words a viewer uses to describe something are ultimately just their words. It's the real-time reaction that truly matters.

Let's rock it out tonight!