One thing I learned in 2011... make sure to check out anything involving Eddie Logix...

Woodbridge-based cassette-cultivating label GOLD TAPES is celebrating a full calendar year's worth of existence - with 12 proper releases (of eps and full lengths) from the Hard Lessons, to Kommie Kilpatrick to the non-Michigan southern-types like Useless Eaters.

And many of these modest spools of magnetic tape have already sold out - but that doesn't mean you can't get an entire zip folder sampling the band's burgeoning clientele (including Deadbeat Beat, Pizazz and more!...like my personal favorite "You Showed Me" by Mountain Time (a locally-brewed Byrds cover). 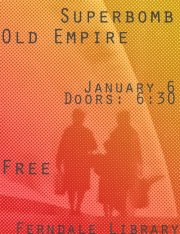 And, by the way - we're having a pair of local bands play the Ferndale Public Library (per Kelly's "First Stop Friday" showcase) - featuring a newer group called SuperBomb and recently re-revved Old Empire! (watch a performance from this year's Blowout, featuring the latter - HERE).

And, if it's still Tuesday, Jan 3rd -as you read this, then consider heading to the Loving Touch (in Ferndale,) to see Old Empire's Gabe Dodson spin records with the Pop Project's Dave Lawson.