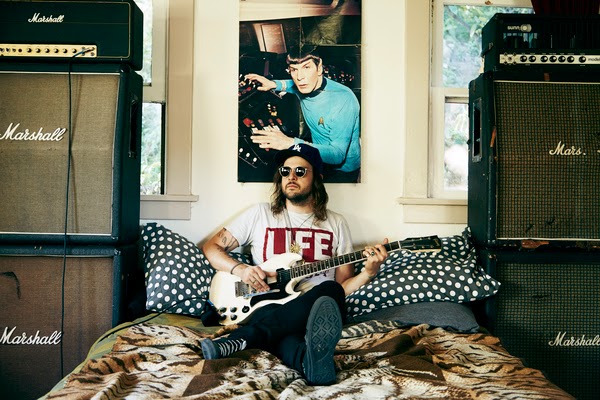 Everyone wants to summarize a sound, ...any sound.

Certain soups of certain-buzzwords get ladled around, like: Nuggets-styled garage revival...

There's much more to King Tuff than all of that...

The guitars and bass swarm together, a blitz, a blur, pedal-mangled marvels melodically coughing a swell of comet-belt-coiling space dust, ("Sick Mind"), there's the machine gun patter and propulsive pedaling of those mean, muffled drums ("Headbanger" and "Beautiful Thing") ...and then there's the dude's voice...King Tuff himself, with a voice sounding unearthly, inhuman almost in the coolest way possible, as though it were synthesized by some Neptunian engineer's dialing up of cosmic reverb... As it does on the song, "Black Moon Swell."

So if you want buzzwords, you can sprinkle in space-rock...but refreshingly weird space-rock. You can pour in some classic-rock throwback heart-attacks with those rip-roaring solos, yes... You can throw in some glam-ified bubblegum pop strut (...ala, yes, a bit of Marc Bolan-esque haze-n-blaze).

Why not just go out and see what it sounds like for yourself
Posted by jeff milo at 6:49 AM