Passalacqua performs at PJ’s Lager House on April 11, part of the Rap Round Robin 2015 Tour with Height and Eze Jackson.

Performing on this special Detroit edition of the Rap Round Robin are Doc Waffles, EddieLogix, Cold Men Young and Gosh Pith. 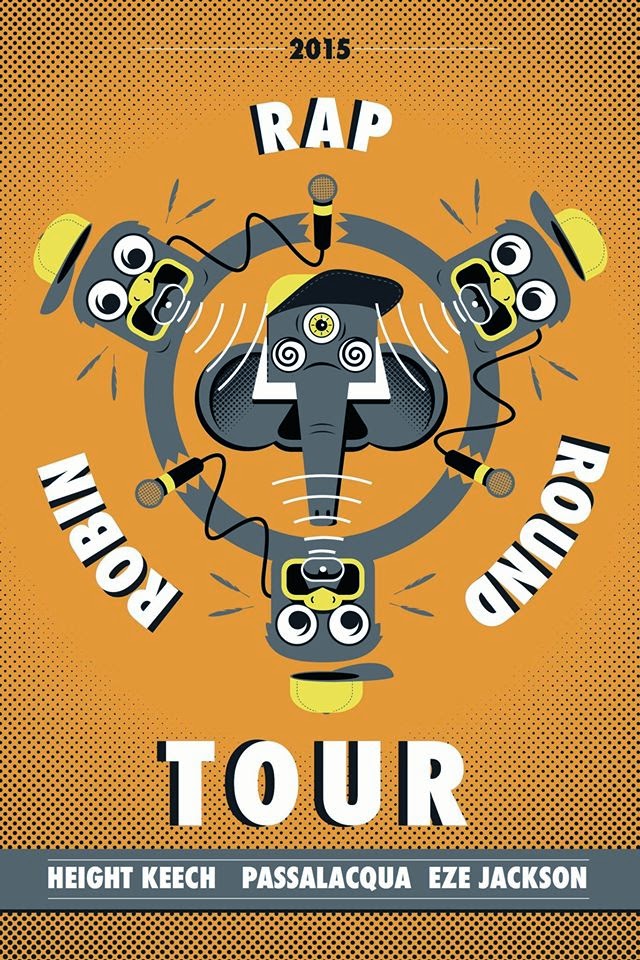 Rap Round Robin, an idea born out of the fertile creative commons of Baltimore several years ago and spearheaded  by rapper Dan Keech (aka Height) is a much needed ego-extinguishing adrenaline boost to the typical rap party: three touring acts will come to a venue and meet up with that scene’s three respective local acts and set themselves up on stages in a circular perimeter around the crowd. No headliners, no dead air, no stop in the action. Keep it flowing and keep on your toes…

Passalacqua are coming home for a much needed pit-stop on what’s proven to be their most ambitious venture since they formed in 2011. To sweeten their homecoming, Mister (Bryan Lackner) and (Brent) Blaksmith (Smith) are releasing an EP called Banglatown, an enlivening entr’acte between albums (leading up to a full length expected in late summer). The duo released the sublime and satirical groover “At The Party” last month to whet our appetites.

Been on the road for just over a month… How scraggly are your beards?
Oh, man. Pretty scraggly. Dan shaved. He’s clean shaven, now, not like the rest of us with our Playoff Beards. Pretty shaggy, though. That comes with the territory.


They’ll think you’re getting on the Action Bronson bandwagon…
Or, I might start getting those Matisyahu references, again…


How’s it going out there with this Round Robin tour? What’s it like introducing the concept to each respective scene?
Most of the people are cool with the concept. I mean, in some cities it’s been easy to tell that we’ve been on the road and we’ll come in and it’ll be lopsided with someone who might be having their first show in a few months, whereas we’re firing on all cylinders. But, we’re not about to dog ‘em for that. It’s not a thing like: Yo, fuck you, we’re gonna crush you…NO. We’re really supportive and we want the best out of the show, we’re not here to toot our own horns, we’re just here to rap and make sure everybody enjoys themselves. So, we’ve supported anyone who comes to the Round Robin.


What’s the response been to the format?
People have been saying: ‘Oh my god, I’m so glad I was on this show or at this show…it’s so good to see real hip-hop traveling together and doing this…’ And, it refreshes everyone involved. They’ve said: ‘Oh, I don’t even wanna perform any other way at this point.’ That’s such a refreshing take on what can be a dull show, sometimes, if it was set up in the typical fashion.


It seems to me that this format could invite the Battle mentality… Maybe edge up the competitiveness…But, hopefully toward a positive point…
The Battle mindset is always gonna be there. For what we’re doing, just trying to connect people, I feel like it’s been really successful. We’re bringing together people that want to be brought together, a lot of them with very similar viewpoints on hip-hop and, really, they want to build something as much as you do. We haven’t run into any scenario where a performer’s been super disrespectful in any fashion.


And with each circulation of the Robin…it’s like collaboratively building up or flowing the energy of the room… I mean, that can happen by just responding to each other’s sets…
Right. It’s more trying to one-up the other in a good way. Next round, you better be coming with some shit! So, yeah, it’s nice to have other people keeping us on our toes while we try to keep other performers on their’s…just for the betterment of the overall show.


Making set lists on the fly? This must be like figuring out a batting order…or which skaters going next in the shootout…
Kinda, yeah. For the most part it’s 30-seconds before our song starts, one of us will look at the other and say, Okay, what’s next? You can’t design the set early, you have to see what the people are reacting to. It’s about building the mood, but without catering to it entirely, ya know? Still doing what we truly want to do in that moment. We’re working well with Height and Eze (Jackson), we work well off each other and at this point, we go and hype each other for our songs so that adds to the camaraderie, too. You’re getting a surround sound vibe at that point and people react to that.


You’re like hip-hop diplomats out there, then, huh? Like, extending that hand of friendship, forge a link between scenes for the sake of the greater national hip-hop community?
Right. Nicely put.


You’re getting to view a montage of music scenes from across the states, what’s your take?
You do get a little micro-image of these scenes and the camaraderie there in each. You see a lot of locals that, if it wasn’t for our tour, we wouldn’t otherwise hear of them and they’re surprisingly good so we’ll be passing their music along to our friends…


Inevitably you might start feeling homesick and comparing these scenes to Detroit? What’s that like?
There’s been certain cities I feel are very similar to Detroit, with a similar energy. We don’t get too much time to explore but at the show I can feel a connection. Like, with San Francisco. We had done LA and that was fun, but there was an overall stiffness to it, but we went to San Francisco and it was so relaxed and everybody was just cool and inviting and it’s that atmosphere that reminds me of Detroit. It was also nice to play with Charles (Vann, aka SelfSays) out in LA and a group of people from Detroit that came out. Cool to look out at the crowd and see a Detroit Vs. Everybody t-shirt. Nice pieces of home greeting us as we’ve traveled which has been comforting.

You’re dropping an EP called Banglatown this month. What can you tell us about it?
It stemmed from wanting to add new songs to the arsenal. If I get down about music it’s because the output isn’t there. It was this impetus of: we’re on the road, let’s have something out that’s new and just have fun with the music again. We’re all doing everything outside of the music, we’re our own booking agent, manager and then songwriter, so we’re trying to juggle all this stuff and you can get stressed out or caught up with that…You forget the music’s supposed to be fun. You remember, then, the excitement of why you write songs in the first place and that’s what Banglatown is about. Not overthinking it We got back to the point of just writing songs to write, again.