S&S curated this line up specifically because it renders a wide range of genres. With finger-on-the-pulse Music News and regular features via interviews and album reviews, along with exclusive items like their flowpoetry section Mysteries Of Sound, and Staff Picks lists, S&S has spent the last year and a half solidifying its presence in the music industry and a distinctively down to Earth yet hip as hell digital publication that brings it all back to the music, dissuading against trends of overtly-provocative, hyperbolic headlines to hook you into reading some vapid new quibble about a band you stopped caring about long ago...

S&S set out to define music journalism on their own terms, in a way that paid respect to the craft of music while keeping an eye (and especially an ear) toward the more progressive developments and approaches that would be necessary in a 21st century of streamers. They've done a damn fine job of it, t'boot... This blogger's been keeping up with their daily updates and reviews throughout the last year and they've been a reliable source both for new releases as well as new insights into my favorite artists.

It's impossible to keep up with everything happening every day in the music industry...But S&S, with its passionately devoted staff spread between Chicago, Detroit, New York and Atlanta, is manifestly motivated to keep up with as much as they human possible - and cover it/digest it/present it...for you... 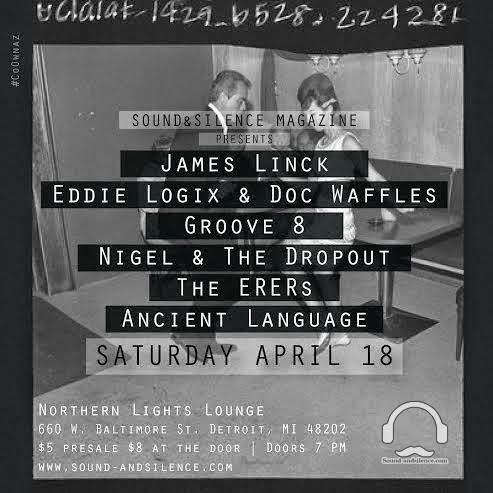 I caught up with S&S Assistant Editor Ryan Solecki to talk about their inception, their development, and their Detroit showcase...

Milo:   So, how did this blog come together... What made you want to join and contribute? Who started it?
Ryan:  It came together due to the lack of freedom in working for other publications. Music news had become simply news and no longer about the music, but about the musicians. S&S founders just wanted a space to do music journalism their way. Chris Robie is a co-founder of S&S, with Kevin (Tshiamala). They've been friends for three years; Chris gave Kevin one of his first music journalism gigs and that was the start...Chris and Kevin typically make all of the decisions, but everyone's opinion is warranted; someone always steps up when necessary, so everyone gets a chance to be ringleader.

Milo:   What sets Sound & Silence apart from the rest...what's your MO, your distinct style?
Ryan:   We've found a way to create efficient articles by trimming the fat and deleting PC verbiage. We're strictly reporting on the music. We also pride ourselves on covering a wide variety of music in terms of genre as well as tier level, national or local. We're working on combining the world of the creative writer with that of music through our Mysteries of Sound Page, while also working on a new series that will bring the public closer to the artist via video confessions....We're just in it for the music and are trying to carve out our space. We are never content at S and S. It's a daily mission to strive for the next biggest and best thing in the industry.

Milo:   How did this show at Northern Lights come together, how'd you curate the specific talent on the lineup and what are you anticipating?
Ryan:  It came up as an idea to spread our name by hosting a show with a wide variety of talent to back it up with. All the acts in the lineup are people that we have worked with before  We'll have different electronic acts, hip hop, alt rock, funk and R & B. It is a night for any kind of music lover to enjoy. We anticipate a great crowd because why wouldn't there be. Detroit is a mecca of talent as well as people who are enthusiastic about seeing that talent. We feel that we put together a talented and diverse line up that will bring people flocking to Northern Lights

Milo:   We're through the first third of 2015: what's the future hold for the rest of the year and beyond at S&S?
Ryan:   We'll be gearing up to cover some festivals throughout the summer and finally taking out the drone. We'll be launching a new Community Fan Video series, too. We're hoping to run some giveaway contests for fans and eventually start throwing bigger showcases starting in the fall. Locally, we'll be filming Riverside Groove by Dirty 313ctronic Presents later in August. Above all, as we go, we hope to continue expanding, refining and bringing people the music news they desire.