An Attempt To Explain: The Imaginotron

I'm going to try and decipher and translate the recent conversation I had with singer & musical agitator Steve Pivalsky.

Steve:  "It's such an important thing. That's the main thing, for me. I know you know what it is, and I know you've experienced it. But, we haven't really talked about it, or explained it..."


Pivalsky will be programming electronics and singing, along with channeling some amorphous monster known as The Leviathan, during his performance with multi-instrumenalist Nik Landstrom, during the Hamtramck Music Festival-- Friday Night at The New Dodge.


Steve:  "It's weird to think about how important this performance is to me."


Steve used to perform in two agit-rock/art-pop/post-techno/spaz-punk outfits known as Marco Polio & The New Vaccines, and Pupils. Both very distinctive projects, yet emitting comparable energies: detached (or barely tethered) bullet trains dense with ideas and flourished phrasings. In both endeavors, Steve would speak about "...the Imaginotron."

Steve:  "There are no distractions, now. The Imaginotron hasn't changed, but it's the center of it for me, now."

Milo:  "Can people actually witness you play this thing? Do you carry it into the venue like an instrument in a case or is it already there? Is it here, now?"

Steve:  "People start to see it materialize as the set goes on... Like with a synthesizer, you have to warm it up. The more it warms up, the more you're going to get from it, you close that gap a bit. People can see it, but not everyone will seeit or feel it as the same thing."

Steve:  "They feel something...I've seen others find it before during their performances. I witnessed Matt Daher find it, during the release of his tape (for Tool & Die). Whereas, other people I watch perform as if they're controlling something like a video game, with that kind of precision..."

Milo:  "And that's not what finding the Imaginotron is like..." 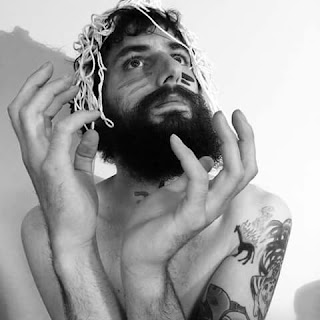 Steve:  "No, it's performing as if they're playing Street Fighter on Nintendo, just, removed from a screen. They are outside of themselves. But they're definitely adept. Others, meanwhile, might be less proficient, but when they find (the Imaginotron) BOOM...they're THERE...they get it..."

Steve:  "Tremors! It's channeling... You do things that you don't know you're gonna do until you see them happen, yourself..."

Milo:  "Something intangible that can't be understood until it actuates itself..."

Steve:  "...yeah. I want to see people sweating at shows again. I want people to feel something. It doesn't have to be some poignant, life-changing experience, but when you're just all together and you stop thinking about everything and just sweating together, not worrying anymore...I try to provoke THAT..."

Milo:  "But, coupled with channeling the Imaginotron sounds like you need to be explosively mindful on a galactic sense, taking in everything to your consideration, the planet, the stars, the asteroid belt, all of existence, all at once..."

Steve:  "I'll do all of that thinking at the start of the show for everyone... Cuz when this ceremony starts, we're all going to be thinking too much. It's all going to just do its thing and come in and stir us... We'll be synced up because we won't be thinking about it as hard. It's this intense focus, then, in a way, because I'm performing a play of what I want people to be like, I'm trying to show how I want people to be. I want to shift it to: No, you're not 'watching something...' you're in it.. And then they wonder: 'What do I do once I'm in it...?' But there is no logic to it. You've all been taught to seek the logic of something your whole lives.."

Milo:  "But this is just purely immersive...abandon...yet with mindfulness.."

Steve:  "And people can't do things that are destructive... That's not part of it. You can still do crazy stuff once the Imaginotron starts, but you've got to reel it in sometimes if need be. People hear crazy music and they think it's time to start moshing, that's definitely what it's not-time-to-do, here. There's so many ways to dance and be crazy and to lose yourself, really, as much as possible, but it's a different kind of '...abandon...,' it's not reckless abandon..."

Steve:  "Mindful-abandon... well-intentioned-recklessness. Because you still have to live here when it's over..."

Milo:  "Not that the Imaginotron ever ends..."

Steve:  "It's very social. It's going to be a ceremony...no matter how many people show up. And, if we have to take it outside, we will..."


Steve had been away from the music scene for a full two years, since the dissolving of Marco Polio & The New Vaccines and Pupils. He was invited to a variety show by Tool & Die's Chris Butterfield last summer, encouraged to do either stand-up comedy or spoken-word art. Instead, Steve set down to compose a couple pieces of music... new, weird, wiry, spring-loaded psychedelic-pop excursions.

Since syncing up with Landstrom, he hasn't looked back.

The Imaginotron never left. It never turned off. But you'll be feeling something this Friday...
Posted by jeff milo at 10:34 AM