Raise Your Shields for BERSERKER III

Berserker Fest returns to Detroit with all forms of intensities involving amplifiers and demonic-sounding intonations. Ears will bleed. Your viscera will lurch, your soul will flounder in the forceful waves of sound... Varying degrees and philosophies, approaches and composites of metal music, or whatever you'd like to call it...will be performed, exorcised and unleashed...for three days in downtown Detroit at the Masonic Temple.

Whatever you wanna call it, you gotta admire the passion of each band on the bill. This monster of a music fest certainly has its own legs, now, having started just three years ago, spearheaded by Child Bite singer/guitarist Shawn Knight...Yeah, now it's got crazy-strong legs and its running at full tilt. 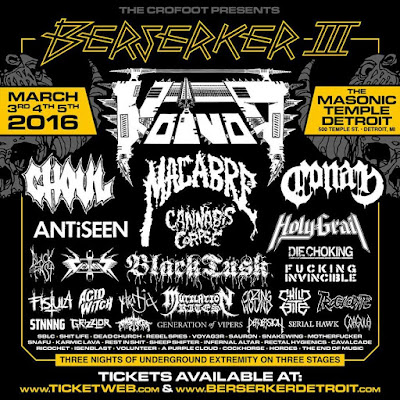 There are dozens upon dozens of bands I could single out, tonight, from the Berserker Fest. I'm going to go with a Detroit-based experimental post-prog outfit that just put out a new single and is planning on an album release in April via Bellyache....
Voyag3r 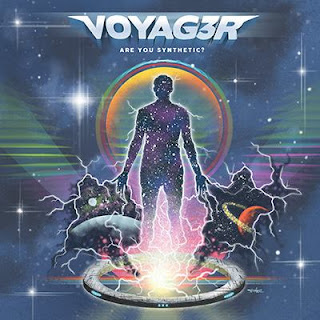 Voyag3r might not match the ferocious/spasmodic nitroglycerine of at least half of the other bands on this lineup, but their vigor is one of a more transportive concentration.
Imagine a monster movie if it were in another galaxy, 300 years into the future, dotted with telepaths shape-shifters, celestial beings and plasma-waves, nebula clouds and hot-rod-rockets,...a journey inside your mind...bending said mind, twisting said mind, and shuttle-launching said mind warp-speed through another dimension. Instrumental soundtrack-sounding psychedelia at its very finest....

Enjoy Berserker, everyone...
And stay tuned for more Voyag3r.