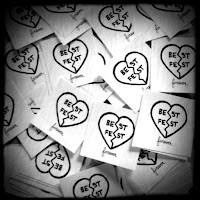 The inaugural BFF Fest in 2014 was essentially the public’s first proper introduction to the Seraphine Collective.

This metro-area nonprofit organization came out of a series of conversations that pondered the possibility and potential impact of an organized effort to set up something like a live music venue, or a record label, or a series of music education programs that would be run entirely by women. Two years later, as they kickoff the 3rd BFF lineup tomorrow night at El Club, Seraphine founder and President Lauren Rossi says that they’re “constantly in a state of gaining support and gaining momentum…”

Since their first meeting in March 2014, led by an eight-member board of women musicians, event-planners, activists and artists, the Seraphine Collective have been “pounding the pavement with programming and curating performances, concerts, workshops and printing a ‘Zine and releasing a mixtape four times a year,” said Rossi, who plays bass and sings in the indie-rock trio Casual Sweetheart. “We really are very much focused on building community. And our mission has expanded…”

BFF Fest springs from the familiar acronym of often scribbled into high school yearbooks (“Best Friends Forever”) but it officially stands for “Best Fest Forever…” As Rossi has demonstrated, along with SC co-founders like Vice President Dina Bankole and Workshop Committee Chair Rachel Thompson, there’s a necessity for a certain amount of boldness, or perhaps, positive defiance, when it comes to building and boosting the multifaceted causes of the Seraphine Collective. “So, we just decided to own it,” Rossi said, “let’s make this the Best Fest Forever…and ever…”

Click here to read interviews with artists on this weekends lineup /

Things kick off 7pm on Friday at El Club with a free art show (with the theme, “The Softer Side”), and DJ Uno Mas spinning until 9:30 pm. Detroit rock quartet Protomartyr are headlining the first night, with Rossi and Bankole’s band, Casual Sweetheart, playing at midnight. On Saturday, doors open at 2:30 pm, starting with workshops (on Hoop Dancing, Ending Street Harassment, and Zine Making and more), while 15 bands (including Britney Stoney, Deadbeat Beat, Stef Chura and more) split performances between an outdoor and indoor stage all day & night, leading up to DJ sets by Mother Cyborg and Stacey “Hotwaxx” Hale. Sunday concludes with a pizza brunch and clothing swap, featuring the first performance of the DJ’s from Seraphine’s Beatmatch Brunch, their first workshop, back in April, for beginner DJs

While BFF Fest is a considerably sizeable undertaking for this team of volunteer organizers, the Seraphine Collective have also been organizing smaller weekend concert events throughout the last two years, each curated to prioritize the participation of women, people of color and LGBTQA performers, committed to establishing an inclusive space of mutual respect, non-violence, anti-oppression that aids to build a feminist community.

As Rossi said, the mission has expanded. The board is entirely female and the impetus for the Collective did grow out of Rossi’s run of interviews with women musicians and artists that explored ingrained stigmas and prejudices regarding gender in the rock music community. Seraphine Collective, said Rachel Thompson, is a music community of feminists. “However, we don’t exclude anyone who isn’t a woman or doesn’t identify as female. We believe anyone can be a feminist and we encourage everyone to come to the shows, we encourage everyone to contribute to our Zines, and now anyone can come to our meetings.”

Seven months ago, Serpahine officially made their monthly meetings open to the public. While they warily expected maybe one or two curious attendees, they have instead welcomed between 10 and 20 new visitors every month, reaching a range of women who have just started hearing about this feminism-inspired effort and want to learn more. “And they all have awesome new ideas,” Thompson said. “And then we’re able to link them with other people. So it’s blown up over the last six months…”

“It all just seems,” Thompson said, “that this is something a lot of women have been waiting for. And now it exists.”

Thompson contributed considerably to their 2015 application for a grant from the Michigan Council for Arts & Cultural Affairs, and beforehand she did her own research to see if there was any precedent, in local history, for something like Seraphine Collective. “As far as I could find, it hasn’t…” At least, she clarified, one hasn’t existed at such a coordinated and energized (and now, publicized) effort…until now.

Rossi said that the Internet has fostered faster means of networking with other likeminded collectives, and a contemporary pair of great examples can be found right here in Detroit, like jessica Care moore’s Black Women Rock and The Foundation of 5e Gallery Celebrating Women In Hip-Hop. Last year also saw the establishment of a Detroit chapter of Girls Rock, for educational summer camps facilitated by women musicians for those aspiring to learn an instrument, to sing, or to become acquainted with the music business.

Rossi is reaching out to similar music collectives around the world, like Mint (Berlin), Slut Island (Montreal), Discwoman (New York) and more, as well as joining Shesaid so, an international community for women working in a music industry. Thompson, meanwhile, said that while Rossi explores the globe’s potential for networking, she aims to further establish Seraphine’s local footprint and align with other grassroots organizations

Bankole, finally, is the lead BFF organizer and was integral in the curation of this weekend’s lineup at El Club. There are bands from Milwaukee, Montreal and Chicago, including the latter, the powerful garage-rock outfit White Mystery, touring in from the Windy City in a show of solidarity with Seraphine’s mission. “BFF 1 was put together from scratch and we were kinda scrambling,” Bankole recalls. She also remembers spending the night before 2014’s kickoff “frantically” finishing up what would become Seraphine’s first Zine edition.

Bankole has also aided large scale, multi-day fundraising concert events such as Mittenfest in Ann Arbor. “And it’s so good to see the bands from that first BFF’s lineup get out into the scene more and play shows and be in demand and put out their own records and grow and thrive. It’s been cool to see something that we organized could grow and bring us those results.” Bankole and Thompson both expressed excitement over year three’s lineup having expanded the breadth of genres represented, including techno, R&B and hip-hop.

But has there been a form of backlash, from any trolling haters out there? Not really, says Thompson, and if so, only over the Internet. “In terms of men, we’ve had way more positive experiences with male feminists supporting us than negative…which, we try not to think about those anyways, because they’re not who this community is being built for, this community is being built for us.”

Rossi started reaching out to find more women musicians five years ago through her blog, because she’d gone through her teens always wanting to be in bands but feeling as though it wasn’t something that was accessible for women. Now, strengthened with an “army of volunteers,” a state certified status as a nonprofit (and soon to be an official federal 501c3), supportive alliances with venues like El Club, UFO Factory and Lo & Behold Records and Books, and more workshops planned for the near future, she’s found an inclusive-focused community that welcomes “those who may feel excluded from, or underrepresented in Detroit’s independent music scenes.”

And everything from networking, to zine submissions, to mixtapes, to the workshops, gives her and the Seraphine board more and more encouragement. “It’s all making the time, effort, energy and love we’re putting in worth it,” said Rossi.

Moving forward, Seraphine’s biggest goal is, (once enough funds are raised,) to establish their own dedicated space, or building, to host future planned workshops, concerts and Zine printing. “If anyone reads this and wants to give us our own church within the city of Detroit…? We’d happily accept that…” For now, along with hopefully collaborating with Black Women Rock or The Foundation at some point, Seraphine is also getting ready to plan more workshops, noting that they’re always on the lookout for potential facilitators who want to share their skills with the SC community.