Catching Back Up with Javelins 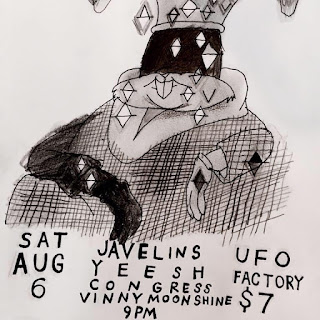 Find out more info on the show, here

Drummer/singer Matt Rickle says that 10 years sort of crept up quickly on Javelins. Their momentum seems to be picking up since they commemorated that anniversary for their first release way back when… Meanwhile, the trio have spent most of the last five of those 10 years “…meticulously plotting” their next move. As Zach Curd wound down his locally beloved Suburban Sprawl Records in 2014, Javelins were actually credited with what was ultimately the final release of that label.

Javelins flung out of the metro Detroit area on that wave of post-hardcore+pop-punk hybridists of 2003-2004, ala Bears Vs Shark, or Les Savvy Fav or Thunderbirds Are Now, the latter of which actually featured Rickle on drums and Javs bassist Julian Wettlin. Guitarist Matt Howard brought in some spacier elements and the band soon expanded beyond the spazzed exuberance, rigid riffs and coarser exteriors of punk and wove a bit more emotion, a bit more poetry, and a lot more dizzying/dazzling effects onto their palette. In fact, you could dance to this…

Rickle and Wettlin have been playing music together since 1998. A previous band dissolved in 2002 and they hooked up with Howard to form Javelins. Their 9-song debut, No Plants Just Animals came out in 2005, but they took it to another level with 2008’s Heavy Meadows, where they invited baroque strings, cinematic ambient sounds, buoyant bass-fuzz waves and a blend of jangly guitars with meteor-show gosh-wow FX splashes. Rickle, meanwhile, handling both vocals and drums, was able to blend intricate percussive patterns under some of his most heartfelt and conceptual lyrics to date…

Then they went into that meticulous plotting period… 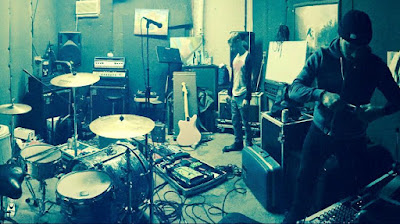 “We’ve been totally active as a band, but we haven’t really been playing shows,” shrugs Rickle. “Just writing, demo-ing, stockpiling, and scrapping ideas and songs. We toured on Heavy Meadow for a year and then got back to writing again. Our tastes have changed, individually, since we first got together all those years ago. So, coming up with something we all agree on is a little less easier than it once was, but when we do, it makes all the bickering worth it.”

And so, they threw a big 10-year-anniversary show for No Plants last autumn and Rickle says “it was cool to see people still interested to hear that record! Playing the show was different, and a bit nerve-wracking; there was an expectation there that usually wasn’t there… They wanted to hear it the way they remember it… But, yeah, people came from all over the country! I really don’t know what to say about that, it was just a humbling and unique feeling that I’m just gonna treasure.”

To assure you, longtime Javelins fans, these three are still the best of besties you could imagine and are still very much interested in continuing to write music together and “see what kind of weird stuff” they can come up with.

Another thing, there’s a positive side to having so much time pass between your releases. Rickle considers it freeing, in a way. “No pressure for something new, at this point, so we have time to get it right. So, why not take your time? We just do it because we still like to… I love my band.”

The band is currently housed in midtown, with Zoos of Berlin as their veritable dormitory neighbors, when it comes to practice spaces. (Howard recently joined that band). They’re currently, as we said, putting together a potential followup to Meadows. “We write pretty freely,” said Rickle. “I mean, there’s no single songwriter. So…., sometimes you knock-out tons of cool ideas out of nowhere, and sometimes you go nowhere for months.”

What can we anticipate? Interesting indulgences of their Krautrock influences, slow burners, motorik grooves, atmospherics that percolate the goosebumps…that kinda thing. “Been messing around with keyboards a lot more, too,” said Rickle. “I feel like this is some of our heaviest stuff yet, but some really pretty music, as well. (Producer Chris) Koltay is really on us to do something with him, so we’ll see… We’re hoping to get in the studio by the end of the year. We’ve said that before, though…hehe….so that depends…”

Meanwhile, you can see Javelins next Saturday at the UFO Factory, with Congress, Vinny Moonshine, and Yeesh (from Chicago). INFO

But let’s get back to talking about “dance punk….”

“Yeah, that was a really fun time for music, I thought,” said Rickle. “At that time, (2004-Javelins,) we were all on the same page, Chicago and DC indie bands were our jam: Sea and Cake, Q and not U, Faraquet, The Rapture…that was No Plants Just Animals. Heavy Meadows was us listening to Flaming Lips, Talking Heads, The Smiths, My Bloody Valentine… Now, we’re all over the damn map. The bands we've always agreed on and got us playing music together initially were Smashing Pumpkins and The Beatles, not a huge shocker. This Heat is one of those bands we discovered together. And we love Bowie. Bowie forever.”

So, going 14-years into this Javelins ride, Rickle looks back and says: “Well, being part of the Suburban Sprawl Music family is a real highlight; everyone in it is genuine and truly talented. We’ve played so many awesome shows….from Deerhoof, to Vampire Weekend. Had a run in with Stephen Baldwin. Covered the Smiths and the Strokes (for Halloween sets). But at the end of the day, I’m still doing what I always have since as long as I can remember…Making music with my best dudes…” 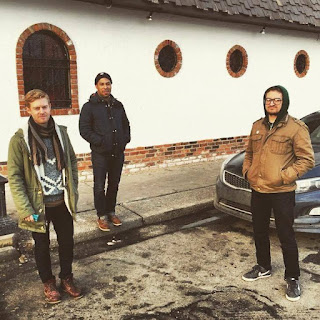 Okay, so you’ve made it this far into the interview, and we’re wrapping up. It’s as good a time as any to ask Rickle, being a drummer and a singer, whether he still has to field questions or comments involving Phil Collins or Levon Helm…

“I used to get Phil Collins questions a lot in the No Plants days! I'd be lying if I said I was a fan though, I've never really dug in to his catalogue. I used to love that Cadbury commercial of the gorilla playing the drums to In The Air Tonight though! And it would be cool to get a Levon Helm comparison, but that one doesn't really come up. Maybe just because sonically we aren't anything like The Band. Actually early on older dudes, like dads would see our band and ask us if we liked Television and Wire, so we started listening to them after that, heh….”