The Magic Stick began re-opening its doors recently to feature regular performances of local bands and artists spanning genres of rock, pop, electronica, hip-hop, techno... you name it. No longer a club zone exclusively featuring DJs or hosting dance nights (when it was "Populux" for a matter of months), the original Magic Stick comes back to life this Thursday night with a substantial lineup of local talent, featuring Britney Stoney, Martez, Weirdoz Gang and Dominique Pari.

The big occasion is the premier of a new single from singer/songwriter & genre-splicer Lin-Say. "2Thou" is a follow-up to last Spring's Shut Up and Pick Me Up LP.

Lin-Say (Linsay Gould) brings soul and jazz-pop balladry to a bit of hip-hop swagger and pop's effervescent frolic. Raised around Metro Detroit, the Motown influence is inevitable, but she also imbues the heavy-hearted intonations of Carole King, the edginess of Amy Winehouse and the classy style of Etta James, tastefully twisting introspective wistfulness with a bit of 80's-pop whimsy. 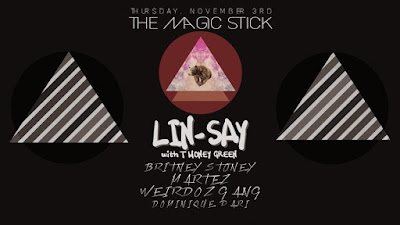