Ferndale has its own manifestation of ferocious hardcore punk rock that’s’ aspiring toward the pantheon of Dead Kennedys, Black Flag or Flipper, so memorize the name: Counter Elites.

There’s something grim-chic about a Counter Elites concert: the music is aerodynamic and wound like a coiled spring, the tones are ominous the drums are tremulous and everything about it feels full blast. Jonny Genocide (under a protruding pompadour and sunglasses) sings (screams) and plays (attacks the) bass, while Switchblade Watson (concealed behind a bandana/baseball-cap and distinguished by his frenetic flails), plays drums.

Crowds at metro area rock venues have swapped conjectures that the two sweat-beaded miscreants behind those outrageous guises are likely local musicians Jonathan Berz and Shaun Wisniewski , longtime friends and collaborators on previous projects/bands. The duo released their 2nd full length album, Pledge of Aggrievance, this month, after a considerably busy year that fostered significant evolutions for the implicitly-provocative, dada-inspired, art-of-the-hyper honing, propaganda-satirists.

Just like seminal/first-wave hardcore punk outfits, The Counter Elites were careful to present a striking iconography that could inspire as equally as intimidate, or perhaps incite. When Berz and Wisniewski are in character, they’re zeal for this disestablishmentarian dogma they’ve fosters (for fictional theatre’s sake…mostly,) can create characters that seem almost psychotic in their intensity. And that’s why it’s so fun to be at their shows. Fun…and loud.

“Misfit…is probably a better term, without sounding so obviously ‘punk,’” Berz said. “Most people don’t understand what we do, or why, or maybe even don’t perceive it as music, and we are totally OK with that. But for the people that we do fit with, we seem to fit surprisingly well, and those people are almost always odd birds, or misfits.”

Wisniewski recalls a show they played with a not-so-theatrical/more-straight-ahead hardcore punk band. The drummer came to him and said something about being ready to walk out during the first half of their set, taking offense at their irreverence toward the punk rock lifestyle…but the more they played, the more it dawned on this drummer that the Counter Elites were something more intricate than that, a composite of a few rather sophisticated (and even philosophical) concepts that could cultivate a much-needed social commentary… (If by way of manifesting a mythology that includes a fictional organization with preposterous aims…)

“We get a lot of that,” said Wisniewski. “People who are confused. And, honestly, it’s just about putting on an entertaining show and being good at what we do. So, I don’t think we really fit in. Punk bands thing we’re making fun of them. Metal bands think we’re soft for wearing costumes. Most indie bands think we’re too loud and aggressive. I’m fine with this… I’m happy to know that if we’re on a five-band bill, we’re going to be the one you remember next month when you’re trying to remember who played that show.” 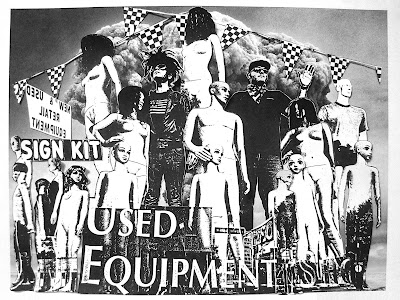 The band has begun to fit in, here and there, with shows primarily hosted in Hamtramck, often paired with comparable envelope-pushers and psychedelic performance artists like The Amino Acids and Carjack! “We do, once or twice,” Berz said, “get to play for an unusually large crowd, at least by our standards, and almost every time that happens, it’s exclusively due to the support of Scott Boyink (Advanced Fish & Chicken Systems Screen Printing).

Other influences to hint at their specific aggressive/raw sound would be Sonic Youth, Minutemen, or even epically costumed thrashers GWAR. These are bands you couldn’t actually corral into the “punk” pasture; there was undeniable musicality, versatility, and authenticity about those bands, just as Counter Elites aspire to an overall presentation (visually, aurally, in personality and in declaration) that would be “powerful and unmistakable.”

“I think we always had the theatre/art aspect of live shows in mind,” Wisniewski said, looking back to their debut performance (Jan, 2013). “It was never supposed to be just a punk band. I feel like from our inception, the posters we make, the album art and music videos, our social media posts, the stage antics, (the fact that (Berz) and I have, maybe only one or two times, publicly stated that we are the Counter Elites and usually play-dumb when asked about it…) All of those things are just as engaging as the music and the message.”

The early songs were short (35 seconds at most), but newer ones have evolved into broader spans… “Even if a song is short, we make it a point to create something complex and interesting,” Berz said. The duo had been in a space-pop ensemble called Songs From The Moon, when they started sliding more and more towards experimentation, genre-splicing, and defiance of convention. They’ve abandoned any strict demand for verses or choruses and instead flourish poetic (yes, poetic) stanzas (of anarchic evangelizing) over break-neck hooks, swift cinder-block breaks and mean bass riffs.

“I do hope that the degrees to which we take our art inspire other individuals similarly stricken with apathy and steamlessness to run with some wild ideas of their own,” said Berz.

At this point in the interview, the alter ego, drummer Switchblade Watson, took over to say that “… (Pledge of Aggrievance) is going to bring (the Counter Elites) one step closer in (their) plan for global ownership…” Watson continued, saying “I can’t give away our secrets, but we had literally hundreds of unpaid interns working 60+ hours per week to make this the best record you never knew you loved.” 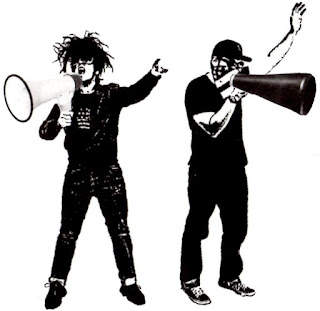 The duo are pulling away from the “tiny song” as a fixture for them. “I never really had it in my mind that we only had to have one sound, or only short songs,” Berz said. “So, I guess this is less of a ‘punk record…’ Our sound has gotten huger and easier to craft, but we are still just playing with melodies, rhythms, and convoluted political or cultural criticism.”

Pledge is the album that finds this eclectically rambunctious duo after they’ve matured (somewhat) and grown by way of negotiating their antics and energies inside a lot of different physical spaces. But be sure, even if their early songs could cyclone right by you, there wass the minutest of subtleties sutured in… “So,” says Berz, “we, at first, would reduce the songs, just on bass and drum, to the barest hyper-punctuation of the syllables.” (Berz has a Master’s in English Composition and is an adjunct instructor at Oakland Community College and Macomb Community College). “So… every syllable must have a three-pronged-hit…vocal, bass, note, drum. It helped that (Wisniewski) was a poet, and does not drum like a drummer but drums like a poet. He is highly syllabically-aware in his compositional batter, and knows how to best articulate that.”

In fact, this band was born out of a research project into punk rock music and protest movements. Berz had been invited to contribute writing on aggressive music for Eric Abbey, a local musician (1592) and professor at OCC. As Berz was studying punk bands of the 70’s, he was also taking classes on Dadaism, surrealism, and independently scouring books filled with interviews, zine collections, and listening to hundreds of albums from the genre/movement.

“I started writing stanzas…” Berz said, recalling that he never completed the actual writing project, but instead wound up building what would become the first songs of The Counter Elites. “And I came up with the idea for our own type of radical political performance poetics, like the stuff I had been studying.

“A lot of the iconography came from the image studies I was doing, and the propaganda campaigns I was researching, and the hundreds of flyers I found from books like Why Be Something That You’re Not, and collections like Sniffing Glue, Maximum Rocknroll and Touch and Go. I was equally as involved in “old-school punk studies” as composition studies for those years.“

“For me,” says Wisniewksi, “punk rock was a giant animal that I was never too heavily involved in. That includes listening as well as playing. As a kid in the early 90s I was big into the heavy metal of the time, and that turned to grunge in the mid-90s, and diving deeper into that music opened me up to a lot of the more experimental and weird stuff of that era, but for whatever reason I never slid over to punk rock…”

On the origins Wisniewski expounded… “We discussed dressing up and having fake people in the band since the inception. We were both just ready to do something creative with a live show, but never take it too seriously, and I've always liked the paradox of that dynamic. Like the music is fast, thrash-y, brash and heavy handed with politics and propaganda and yet, there's obviously two normal guys wearing wigs and sunglasses and weird outfits on stage…”

And then, on its ‘evolution,’ Wisniewski concluded… “We didn't start as a goldfish and change into a bird. I feel like we started as a goldfish and turned into a whale…. I think what Carjack does live, and the things that The Amino Acids have accomplished have, for me at least, been like an open door for us as well as a personal inspiration. But more than that, and I think bands like our band know this to be true, when you're not "you" in a band, it just completely changes how you act on stage, the things you'll try as a band, what you can say, and so much more. It's a freedom that's usually only offered at Halloween parties when you're in some anonymous mask and no one knows your true identity.

No rules + Absolute Creativity Allowed. “We will always be reaching for ways to make it more exciting for both ourselves,” says Berz, “and the audience.”

From here, the band will start working on their third album, almost immediately. Actually, it’s already written and ready to go; 19 songs, called Good Company Man, something of a rock-opera.

For the foreseeable future, The Counter Elites will continue to make whatever musical, artistic and literary products we can that are easy to whip up on a no-string budget on its way to inevitable Total Global Ownership.