The Sound of Eleven

There are, at least, four key aspects to the experience of acquainting oneself with pieces of music, by which I mean contemporary compositions, artful dispatches from the DIY breed encountered across the expanse of the Internet.

The way that music endears itself to you includes, of course, its essence. That's the part where I describe to you what it sounds like. The part you already understand, yourself, deep down; that visceral reaction you have to the midnight gusts of the vocals: soft and sinewy at the same time, the growl of these droning synths forging an enveloping canopy careful to keep to the peripheries so as not to block out the lilting melodies but just enough to stoke a certain tension, or the patchwork of minor keys, the swell of tones that risk eclipsing the piece but always leave a thin mantle, whether at the top of the mix or delicately buried, for the percussive element to punch its way through... 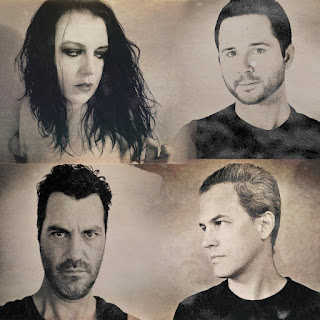 The next part you connect with is, inevitably, the human element. Who are these people and what is their collective story... Funny that, the enterprise of bands tends to trim much  nuance and combine four people's individual lives into some kind of hybrid, a troupe with a single voice demonstrated in 4-minute chapters or as a synchronized ensemble upon a stage (more on that later). But whereas we know these players from previous bands, I feel like bringing up résumés would distract from the point of this project.

You're listening to Sound of Eleven And the album's title, in itself, denies you the assistance of deciphering its aesthetic for yourself by suggesting there is no artist and there is no name...

The third aspect involves the vibe, the look, the message. This is specific from the way the music sounds, the way it feels. This involves the artifice that you, yourself, get to receive and keep from the artist; particularly the album cover....and the lyrics.


And then you look at that album cover. It could be the surface of the moon or an irradiated orange peel. It could be a still-frame from Eraserhead or it could be just a glimpse of a terrible fantasy landscape you've once found yourself flying over in the middle of a dream of potent disorientation. This is uncharted terrain. That's the point. And when you pare back the ideas of being able to identify the band, and you disregard prior projects, then the lyrics, such as "Clocks," can hit home harder.

But what we have is a sublime interweaving of dark ambient meditations, apocalyptic folk, post-industrial slow dancers and strung-out post-rock. What we have is something to wade into...sift through...at, at points, have to come up out of...

And then there's that four aspect... Seeing the band live, seeing their faces, their eyes, the way they perform together, their body language, their dynamic abilities on display, whether at a drum kit, on guitar frets or in front of a microphone. And, as of right now, you do not get to have that opportunity with this band.

You can only listen to this album.
Posted by jeff milo at 5:44 AM