I am thrilled to finally feature some jazz. Not just jazz, but world-fusion, prog, and classy vocal-music. Ann Arbor-based ensemble Talking Ear unveil the next single for their forthcoming album here on Deep Cutz... 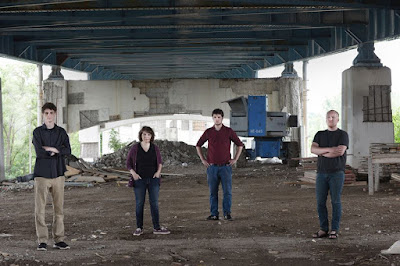 Check out "Face It," from the forthcoming album self-titled album (available June 16)
Talking Ear's next show is Friday, June 16 at Ann Arbor Distilling Co. in Ann Arbor with Saajtak.

It's far too rare that I can engage with a piece of jazz music. And this one is an odyssey, a stir of different styles, sensibilities, era's and experimentation. Talking Ear sumptuous soul with an avant-garde modernism, splashes of Spanish guitar, lavish piano cascades, intricate percussion, and a mesmerizing vocal performance. This blog often covers indie-rock, hip-hop or electronica, but let's listen to Talking Ear's new single, "Face It."


Talking Ear are a prog-jazz ensemble featuring five masterful instrumentalists, each a composer in their own right, with keen sensibilities for arrangement, dynamics, and an adventurous experimentalism.

Talking Ear's lead vocalist Estar Cohen has a majestic and elemental voice that catches you as a windstorm, something graceful and natural, yet whimsical in its melodic trajectory. Daniel Palmer is on guitar, putting on a clinic of Wes Montgomery marvels during one of the songs most energizing movements. Just as Cohen studied piano, as well as attaining a degree in Jazz Performance, Palmer is also an adjunct professor at Adrian College, teaching guitar! This band is stacked!

Meanwhile, Ben Rolston, who's on bass for Talking Ear, has been in several music projects (including the Appleseed Collective) and released his own solo album of compositions in 2012. A product of U-M's Jazz Studies Program, he has wound up traveling the world as a professional musician. Then there's Travis Aukerman, the band's percussionist, who academically mastered the magic of all things drum via the University of Toledo's jazz program (graduated magna cum laude). He attained sensibilities for classical jazz, as well as music and culture from the Caribbean Islands, South American, Northern India, and West Africa. He contributed to Cohen's solo album.

Then there's Benjamin Maloney on piano. This composer and arranger from Toledo was a finalist in the 2013 ASCAP young jazz composers competition. He's also been featured twice at the Jazz Master's Concert Series at the Kerrytown Concert House in Ann Arbor. Like Auckerman, I love the energy he rhythmic energy that he brings to his own instrument, balanced by these cinematic and forceful sweeps across the keys.

I just love how this group has this murmuration quality to the way their five-piece flock bends, sways, and swoops from furtive and feverish improvisational movements, to the calmer waters where the vocals are given space to soar. Detached from set downbeats, they find grace and harmony in what could otherwise be havoc. The rhythm is aerobic, the vocals are so emotive, the pianos crackle like fire and the guitar's velocity during one part of the solo almost breaks away from the formation.... But these five young virtuosic jazz talents have a chemistry that keeps it all together, throughout even a 7+ minute blast. 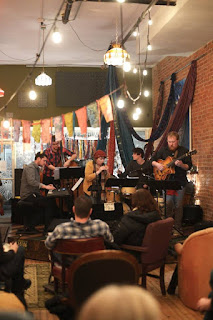