A Night with Estar Cohen 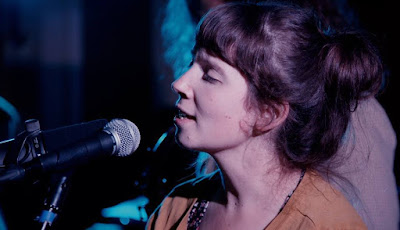 You might have your own ideas about jazz, but Estar Cohen can likely shake them up for you.
“Jazz has history, but it is not stuck in another time period,” the Ypsilanti-based
multidisciplinary musical artist said.

Cohen’s voice is a vibrant, spirited entity, able to melodically sprint in staccato bursts over a more frenetic composition with rapidity and agility, and then spread out her intonations into longer measures with a sweeping elegance.

This Saturday, Cohen has an ensemble backing up her original compositions for an intimate performance at Cultivate Coffee & Tap House.

“(Jazz) isn’t confined to the combo you hear that was hired to play background music for the restaurant, or, even the other end of the spectrum, say, Lincoln Center. It isn’t the Starbucks Compilation CD! What jazz IS…well, it’s hard to say, because as time goes on, it becomes more and more difficult to put in a box. But that’s what I love about it. It’s a creative music.”

Cohen is still young but already seems like a jazz vet around the local scene. She got her degree in Jazz Performance in 2015 (Univ. of Toledo) where she honed her skills in improvisation and learned composition with esteemed jazz artists/instructors.

Also in 2015, along with putting out her first album and working on jazz clinics with her other quintet, Talking Ear, she was also chosen as a finalist in the Herb Alpert Young Jazz Composers Awards. She taught songwriting with Earthwork Music for a couple seasons, part of their educational endeavors of their non-profit SEEDS. Currently, she teaches music around the Ann Arbor area.

Her real joy, is not just performing, but more so: composing. “Story is important,” she said, of starting out the lyrics of any arrangement. “I love personal stories; attempting to see a life through someone else’s eyes, and to relate my experience to others. My lyrics often focus on story, and I do my best to have the written music reflect that. I am so fortunate to work with musicians who also care deeply about this.”

Cohen’s dynamism springs from her strong sensibilities for improvisation. After a recent concert, someone from the audience asked how much of her performance was written, and how much was improvised, a question she often finds herself fielding. Her improvisation is blended, by design, into the composed material. That’s her signature approach; considering every instrumentalist or vocalist who could likely be joining her in bringing a fledgling work to life as it comes to be performed later down the line.

“Because their voices will be a huge part in how the song will actually take shape,” said Cohen. “IN any moment of one of my performances, someone will be, in some shape or form, improvising, because the music is meant to grow and change from performance to performance.”

Cohen was drawn to music from a young age. Her siblings (Ben/Sarah) are also songwriters and musicians. She said that she was exposed to the idea of supporting and experiencing local music from original songwriters at an early age. Her parents even crated and ran their own music venue called the Happy Badger.

When it came to her first encounter of jazz, back in high school during a concert at Murphy’s Place in Toledo, she may not have immediately grasped it, but nevertheless profoundly felt the energy of the music. From that point, she started listening to jazz as much as possible and eventually studying it.

“Going along with that, my whole journey leading up to this point has been shaped and elevated by the masters willing to pass on their knowledge to the “next generation.” At Murphy’s Place, pianist Claude Black, who is unfortunately no longer with us, and his musical partner bassist Clifford Murphy opened the stage to young musicians, allowing us the opportunity to play and learn from them  - a true instance of “learning by doing.” To be treated as an artist as a young person is motivating. It makes you start thinking as an artist. Then you begin to expect more of yourself!”

The Estar Cohen Project started six years ago; it’s featured different artists at different times and is designed to be flexible for allowing to do so as it evolves. While Cohen collaborates in other jazz groups, this band is where her compositions are the driving force.

Last week, the Estar Cohen Project (which features Dan Palmer on guitar, Josh Silver on piano, Ben Rolston on bass, and Travis Aukerman on drums), recorded a concert in front of an audience at Willis Sound, which will hopefully be released as a live album in the near future. She also just recorded an EP of stripped down duo songs with bassist/vocalist Maggie Hasspacher.
You can’t have your mind made up about jazz until you see Estar Cohen. 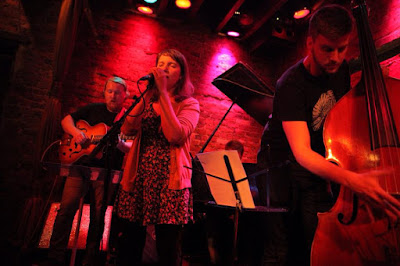