It starts off ferocious, like a motorcycle belching fire. The cymbal hits seem like lane lines passing steadily into a blur. The chugging riff gets your head loose like a swivel. The vocals glide across this wavy melody and in the refrain, says: "Yeeaah...." And you're in. You're feeling it. Carried away...launched, even. This is neo-space rock. This is several strains of psychedelic all at once. This is shoegaze with a vantage point higher than a stage, more like from the stratosphere.

Friends of Dennis Wilson started up more than 10 years ago and were early satellites that started orbiting in what would become the "neo-psych" scene, (read: Thee Oh Sees, DIIV, Tame Impala, etc...) There wasn't really a word for what FODW were when they started up, and they were inevitably raked into the garage-rock category, more or less, as that cache was still lingering around Detroit in the post-White Stripes days. 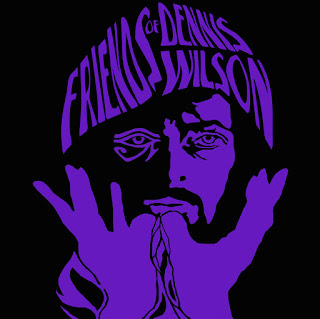 What was going on in their tunes, even their surfier stuff, was something a bit more mystical, a bit more dark, a bit more of a dive into the unconscious where the regular worries of the every day disintegrate and your mind is freed to kaleidoscope through some new contemplations. The aura, the legacy, that they were continuing, was very much a, for lack of a better phrase, druggy kinda rock trip - but better put as a purposefully atmospheric layering of guitar, bass and drums dressed with lots of careful stitches of reverb, echo and distortion, so as to evoke an altering of your perceived reality.

"'Psych' is anything BUT the norm!" said Tony Thrush, lead singer/songwriter for FODW. "But then, 'the norm' is subjective too, we could debate that. I just feel that psychedelic music is anything htat's different. It's anything that makes you think!"

This fall, Friends of Dennis Wilson release 'Space Maintainer' on vinyl through a bigger label, a first for them, having done it all DIY up until now. There will be 50 limited edition thumb drives of the album (via Rocket Arm Records) available at upcoming shows. This is an early release of the album, with the 'space maintainer ignition unlock' via the thumbdrives.

Anyone boarding this vessel expecting typical shoegaze are going to be throttled a bit by how heavy this record can get... Not that it's metal, or hard-rock, but just that there's a lot of emotion and energy in the playing - like each instrument is forcefully trying to conjure something. The band's iconography and on-stage presence has tended to suggest something of an occult-like vibe, but I think the only possession going on is that of the trance-like influence that exertive, propulsive music such as these new tunes demonstrate, can have upon an opened mind. 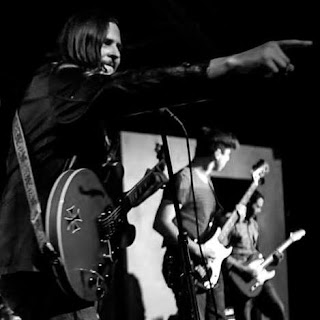 "People can like what's comfortable-sounding to them, like something they already know. Don't get me wrong. I love bands going for more of a '60's garage' thing... But for me, there's never any direct influence, I just pick up a guitar and go...! People in other bands tell me how they feel that no one's understanding wat they're doing. But it's that it's not initially safe to their ears. It's gonna take a little while to catch on..."

Thrush and his band mates, Tim DoNesia, Sam Santuro, Space Bot Steve, and Brian have never waivered. Even when they weren't catching on with a clique or a scene, testing out those weird early new-century-psychedelic sounds. After 10+ years, Thrush said he's getting more feedback from fans and critics who have just now steadily realized that they've been chugging along, DIY-style, for so long. This is their first release on any label, and it's undoubtedly their most varied, fully realized work.

"It's about getting out there and doing your thing, and coming out your way, and you'll get respect for that," said Thrush. "Never waiver... and time will be good to what you're doing, in different ways."


'Space Maintainer' becomes a testament to perseverance. Maintaining momentum, occupying a space of their own. "No matter what you're doing, your art will eventually be translated and recognized in some way," said Thrush, speaking from 15-some-odd years of experience with eventual connections forged around the global music scene. "But, first, you gotta love what the fuck you're doing before anyone else can dig it!"

'Space Maintainer,' with its cathartis crescendos and vulnerable softer sides, also becomes a tribute to a fallen comrade. Singer/songwriter/guitarist Rabeah Ltief passed away recently, a leader of the band Electirc Lions Soundwave Expermient, and a potential future-member of Friends of Dennis Wilson. "That just broke me," Thrush said, recalling the day he found out, and inferring that Ltief, who contributed to the song "Just In Case Place," had intentions to join the band. That love for Ltief, that memory, maintains the space left behind by his absence...

"I feel like I've just got to get as much done as I possibly can," said Thrush, with what seems like amplified motivation in the face of what was a rough year of lost friends. He's also working on a book, and a feature film, which should be coming out in the next six months or so. 'Space Maintainer,' meanwhile, will be out later this fall!