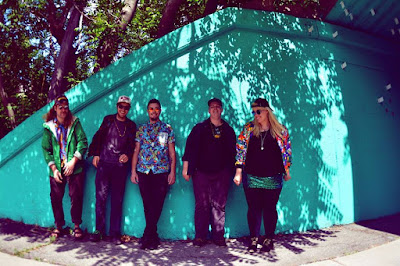 I've not yet been able to put my finger on the special kinda funk that's forged by White Bee. It's just something in the riffs, the sharp pull back of those hooks. Then there's those soulful vocals from Shannon Barnes that have a croony R&B curve to their suave intonations. The guitars and rhythms can have the cool shuffle-skid-stomp of jazz expeditions, throughout the verses, but everything can muscle-up for a more rock-n-rolling roil when the song necessitates it. Their versatility has made me say, on more than one occasion, that this is a band you should be watching, this year & next year!

This song's silkier, measured spills of synthesizer shimmers adds a bit of romantic new-wave swoon to the stew. But let it play and pulse into that invigorating chorus, where song's fuselage tightens up for this swift barrel-rolling groove. "Beat State" is just a taste of what's to come in the near (albeit indeterminate) future, when the Detroit-based band releases a follow-up to their 2015 EP. The goal is to make their next release a full-length.

Until then....
White Bee perform TONIGHT in Hamtramck, at the Korner Bar
ft. Oshwa, Growwing Pains, and Vnesswolfchild
Info

Single artwork by Carmel Liburdi
Posted by jeff milo at 10:25 AM