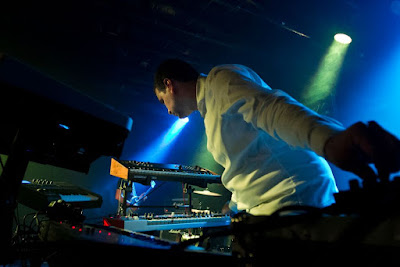 Steve Greene's enthusiasm has always been infectious.  There's a charm to his energy as a composer, even just off the stage, the way he talks about synthesized music!  But to see this tall, broad-shouldered metro Detroiter up on stage, an inclined stance over his galaxy of gear, immersed, entranced...something pure visibly illuminated in his aura, like a would-be protagonist from an 80's sci-fi movie, a hero, inspired, venturing forth on his own epic journey.

Greene has been part of the trio known as Voyag3r for several years, but Electronic Dreams for a Holographic Existence is his first proper solo album. Some of Voyag3r's aesthetic, epic and cinematic vibes, valiantly marching/post-industrial percussion, and alien-sounding operatic drones, continues with his new material (which comes out January 26). But dig the single he put out last week: "Machines, Schemes and Manipulations."

Whereas Voyag3r could conjure the heavy metal realms of rock, Greene's drawing in that jazzy saxophone, a crashing bass hook, a dazzlingly whirled synth melody, and a striding percussive arrangement that you just as easily dance to as slay a demogorgon.

Greene's inspiration comes from the vivid and imaginative worlds of science fiction and horror: be the classic 60's stuff, the grittier or atmospheric 70's, or the neon-streaked styles of the 80's. Be it The Thing or Alien or Robocop or any other kind of story of the fantastic, with unlikely heroes being pitted against bizarre circumstances, that inherent drama and sense of adventure is what fuels the music of Greene. You're encouraged to close your eyes when you listen to this music; to daydream & imagine your own movie! You'll feel like you're being called to the rescue... That you could save some kind of day, here!

I asked Steve all about his past, his process, and his production style.

How did you first get into creating your own electronic music?
Around 2006, I purchased an Alesis Ion synthesizer and spent a lot of time scrolling through its sounds and tinkering with its many knobs. And I was also getting familiar with Pro Tools and mixing at that time.  I composed a handful of electronic songs using the Ion and the Expand plug-in that came with Pro Tools. I was having a lot of fun exploring the possibilities of this new-to-me world. It was such a refreshing change from the strictly rock environment that I had been in and I welcomed the wave of rejuvenated creativity and this long past or forgotten set of various sorts of inspirations that just came rushing back to me!

What do you enjoy most about composing electronic music? Every time I am writing or recording it’s exciting, but it’s always a treat when I end up on a path that makes me feel like I did when I got my first synthesizer and spent those many hours immersed in it and discovering old and familiar sounds as well as new sonic textures.


What is it like, as an artist, as someone imagining and composing electronic sounds, to see the ways in which humanity has lurched ever further, immersion-wise, into a Blade Runner/Matrix-like existence? Cuz that's the kind of thing the album's title makes me think about...
To me, that whole concept of our modern technology is the ultimate double edged sword. For all the good, there is also the negative. If we are looking at this myopically, we trade the wonderful access to all of humanity's acquired knowledge and the ability to easily communicate and spread information with the sacrifice of our privacy, eroding of true, meaningful social behavior and probably most dangerous is an increased vulnerability to disinformation.

If we’re zoomed way out, metaphorically speaking, we may be witnessing our great barrier...Or, if we’re zoomed even further out, is any of this real in the first place?


What makes analog instrumentation special to you, and how can it enhance not just a listening experience, but the experience of the creator in the studio?
All the inspiring records that I grew up with had actual musicians playing real instruments. That is always going to be my base line. I want to hear the notes as they were played, not how the computer quantized them. There are always some exceptions, but that is what inspires me and I believe that when any artist is truly inspired that is when true magic happens. Whether that is music or painting or writing a story, I feel that true inspiration comes from a place of honestly, sincerity and some struggle. I enjoy making hard choices in my writing and recording process; committing to sounds on the way into the recording medium, giving myself hard deadlines and hardware gear naturally makes you have to “earn it” way more than software where you can always go back and edit or redo.


The single you put out seems to be retaning some of the darker, more atmospheric vibes that you had from the film soundtrack you did last year. And it diverges, sorta, from the vibes of Voyag3r... What are some other ways these songs distinguish themselves from anything else you've done?
Voyag3r is definitely a rock band, so I think it will usually be heavier and more aggressive. That being said, I try not to set up restraints or rules for any of the music I do. Electronic Dreams For A Holographic Existence is one snapshot in time that has a certain attitude and color. I hope to capture another unique vibe next time out.


So, rock band singers get to vocalize and project to an audience: guitarists can glance up from their solo and look out at the crowd... but you are often, like, head-down, grinding away, almost in a trance! And the music itself is comparative more trancey than most local bands who might be giving an audience something like a power-pop experience. So, then, what is it that YOU enjoy most about performing works like Holographic Existence for a live setting? Or, what are you looking forward to most about possibly performing these in the near future?
As much as writing and recording, I’ve always loved performing music live. I love to go to concerts and I love to play concerts.When I am performing, either Voyag3r songs or my solo material, there are really two performances happening at the same time. The first is the more obvious one, the playing of the actual notes and chords, usually on multiple synthesizers. The second is the tweaking or changing of sounds, usually while simultaneously performing the music, on-the-fly continual volume mixing and foot dancing on sustain or volume or effects pedals.


It's a lot o' gear to keep your eyes on...
It’s quite an undertaking, but I wouldn’t trade it for anything. A reoccurring response that I hear after shows is that the listner sorta “spaced out” during the concert and either visualized movie scenes they love or just made up visuals in their head that the music fed them. That seems A-OK to me!