Rottinghouse: Intentionally Cold & Minimal, But It Still Has To Be Beautiful 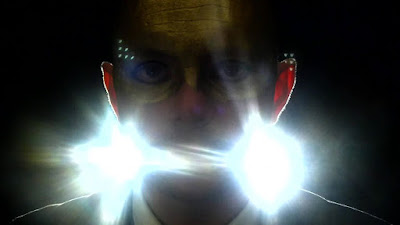 Singer/songwriter Jaye Thomas started this dark wave project back in 2014, when a batch of songs he was working on strayed from the aesthetic of Rogue Satellites, his collaboration with singer/songwriter/artist Lisa Poszywak. But as we'll illuminate in this interview, Thomas' alter ego, Rottinghouse, became a multimedia collaboration with musician/artist Courtney Spivak (of Ex American). Spivak uses lighting, costumes, make up, props, and found footage video projection to create a fittingly transportive visual experience.

The Feb 3 show at Trixie's will be a music video premiere for the single "Whatever Helps You Sleep At The Wheel." Spivak, meanwhile, produced several videos to expand and augment the experience of each song. Check out her work for the Rottinghouse song "Soft Satellites" 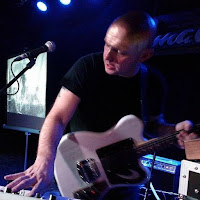 Just because something dreamy has degrees of dread does not make it a nightmare. The imbittered can reveal sweetened qualities. Something electronic can profoundly connect to the soul. In a literal sense, the percussive arrangements of Rottinghouse can evoke a sense of transportation, but when you experience the music, or especially when you encounter it as a live creation, it can be like being transported...to a somewhat strange place that may often eerily resemble what we'd already perceived to be our real world; made to feel cold, albeit, only perhaps because its lyrics are designed on erasing illusions, or excavating the harder truths we try to bury.

Call it post-apocalyptic pop, or gloom-wave, or maybe lullabies for permanent midnights. Rottinghouse will thread indelible melodies into your ears, sung over stimulating, propulsive dance beats and sleek synth hooks. Minor keys may dominate, the bridge of certain songs could accumulate droning clouds, and you won't hear your vocalist hit any capricious falsettos...but still, it pulls you in... It transports... Or is it more that it transforms? The performer manifests in a suit & tie, or in all black, with a glittery golden veneer over his skull; eyes glowing, voice humming... It goes beyond the typical live music experience.


So Rottinghouse songs were, initially, tunes you were working on that just wasn't fitting with Rogue Satellites. What distinguished them?
Thomas:  If I take out the aspects that I think characterize a (Rogue Satellites) song, what's left is this sort of sparse cold wave song.

And what draws you to  'cold wave?'
Thomas: Cold wave is a genre I've always been interested in.  It speaks to a certain part of my personality. The visual aesthetic doesn't come from me. It comes from my partner in Rottinghouse, Courtney Spivak. I really thought the stuff she did for her own band was amazing so I approached her about working on this project with me.

There's always been a dark side to your songs...
Thomas: Yes, I think Rogue tends to weave in a sort of dark humor within the exuberant framework of a rock n' roll song.  While with Rottinghouse, that darkness is right out front. The process has been very subtractive. Taking away that tendency to be sort of playful with the music has left me with this sort of sparse open thing. It's intentionally cold and minimal but it still has to be beautiful.

What have been some primary musical influences for you?
Thomas:  The Cure has been one of my favorite bands since I was in the 8th grade. The Pornography album specifically was a huge influence to the development of (Rottinghouse') sound. Joy Division was a band I became interested in later, but they are probably equally influential to me now.

So that goes back to post-punk, new wave, goth, glam... What about 'cold wave?'
Thomas:  There are a bunch of contemporary cold wave bands that are making great music currently, or even very recently... Some of my favorites are Soviet Soviet, Skeleton Hands from Cincinnati, and Detroit's 800beloved. Contemporaries were very important because they made me see that people might actually want to listen if I made this music. Because it's very self-indulgent, this type of music... It's like, "I feel like shit, let me tell you about it. You care because..."...It's affirming to think people can still take something positive from it.

What did you take from the songs on Patient Passenger? What was the experience like, for you, to get these songs completed?
Thomas:  Those songs all deal with separation and isolation in different ways. Some deal with depression, fear, and anxiety but those things are isolating too.  The name Patient Passenger was lifted directly from the lyrics of one of the songs, "Whatever Helps You Sleep at the Wheel," but I thought it spoke to the overall theme of the record. Stepping back when the writing and programming were all done, it seemed like this album was about feeling disconnected in the so-called age of connectivity.


Thomas has already started writing a new Rottinghouse album that will be more guitar oriented, and "...a little more aggressive."

Rogue Satellites, meanwhile, will have a busy 2018: they have two volumes' worth of new music they just recorded.