DEATH - Give It back 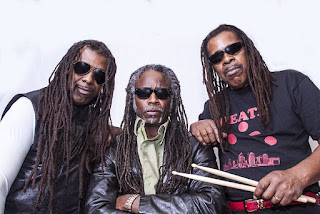 "Give It Back" was recently unearthed from the depths of the DEATH archives. The song's lyrics have a re-energized urgency today, addressing the virtues of being environmentally conscious citizens of this planet and railing against the social dissolution we are all facing in the world today.

DEATH's latest is exemplary of their dynamic rock 'n' roll riffs, soulful grooves, an impassioned vocals, is a charged-up appeal that we, as fellow humans, start acting as a global society, and consider curtailing the status quo of always taking from the Earth, and instead, giving back to her.  , we as a society continue to take form mother Earth and now it's time to give back to her.

DEATH were a once-mythic-but-later-properly-celebrated Detroit rock trio of brothers, formed in 1971--way ahead of their time in terms of pioneering a blend of garage-rock, soul, punk and rock 'n' roll. They reformed in 2009, with a 2012 documentary film following soon after that told their story. More info
Posted by jeff milo at 2:39 PM