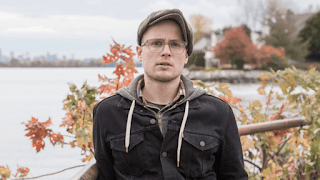 We can get so stuck in the status quo that it starts to feel we're enmeshed in some imperceptible abstraction. Songwriters like Jordan David Wright sing with the wiser wariness of someone who's actively created some distance between himself and loud and ignorant babble of, you name it: social media, a weekend party, talk radio rage...

Separating yourself with that measured amount of distance from the fray to then try and bear witness can take a kind of toll, but it's yielded a hauntingly beautiful batch of songs from JD Wright, each as unsparingly honest as the last. Wright has rendered poetic ruminations from a moment, a whole year really, of spiritual and philosophical strain and evolution in his life, as he's lurched up and out of the enchantment and naivety of the youth of our 20's and into the coarser scrapes and unease that set upon you after giving closer surveying to the profoundly quieting situations and trends that have only been worsening, like weeds around you, all your life.

Contemplation comes to you naturally when you work as a librarian. But even as his day job situated Wright inside an otherwise typically quiet environment, he's been spending the better part of the last 10 years' worth of his weekends in supremely amplified rooms, with rambunctious audiences and voluminous punk rock bands.

The librarian-by-day has been a guitarist and vocalist in a handful of bands, including Due North and Cheapshow, but never officially took center stage, so to speak. That changes in the Spring, when he releases Lake Effect on vinyl. The album was recorded during the winter of 2017 in Ferndale, MI, backed by guitarists Eric Plunkard and Alex Errington, bassist Noah Fenton, and drummer Jordan VonZynda.

Wright may have made niche for himself over the years since moving down here to the Metro Detroit area, but he was raised in Northern Michigan. That's a much more rural place, a colder place, a more conservative place, a more religious place; it's a place where the concerns of communities and farmers may come second to things like the Line 5 Pipeline, or where tragic stories of opioid addiction go ignored from the headlines. It's a place where you can feel out of place, pretty quickly, if you start stepping just far enough away to glimpse back. And that brings me back to the toll it's taken....

Wright thrived amid the punk rock scene: anthemic ballads at swift tempos with throaty vocals and an overall full-on embrace of emotions and anger...and joy, too. But Wright's record is, essentially, a folk record. It's a folk-ROCK record, at times, with propulsive chord progressions and strong, earworm melodies threaded throughout.  But it's still something closer to a punk rocker that's pondering some of the heavier stuff we'd all rather not talk about or think about in the midst of banging our heads to a beat...think Billy Bragg, or Joe Strummer, or Ted Leo, artists who still have that vigorous style of guitar playing and passionate vocal delivery, but aren't shying away from parsing through vitriol or the small societal calamities that can seep through the cracks of our consideration.


"No Resolutions" references the last night of a given year, and there's something stark about it that suggests, in the sound of Wright's voice and the closeness of the guitar, to where you almost feel like it is 1am, that it is a writer in a room with a world of general dismay and nonsense careening outside; and the startling intimacy comes when you realize that he's allowing himself to say things outloud that he might have been afraid to before...Like he might not even be aware of, or care, whether an audience is going to hear this confessional. It's a powerful kind of catharsis.

Production-wise, it goes from a single acoustic guitar, to a churning guitar that's gliding like a distant jet in the background. When that pares back, we're left with a final verse of Wright admitting a fear of spiritual disrepair, but it's quickly cast aside by one blunt, brutal resolution, the exact wording of which you'll have to wait for when the song finishes.