Satori Circus: These Are My Friends

"What I see, what I hear...what I feel...it's all molded and forged with my imagination, an imagination that was so vivid as a kid and that, now, as an adult, I can't see ever letting it go." - Satori Circus

The artist behind the facepaint, beneath the costumes, the artist that pantomimes and projects his versatile vocal range over a composite of rock showtunes and punk operas and glam-folk waltzes, is always pushing the proverbial envelope. Satori Circus was conceived 30 years ago by musician & performance-artist Russ Taylor, a Detroiter who got his start in the early 80's with punk bands, but would eventually approach the stage with a strong sense for disrupting expectations. As it evolved, it became equal parts Dadaist vaudeville, Buster Keaton charm, DEVO subversiveness, Rocky Horror vamp & camp, and Bowie-like chameleonesque rock 'n' roll transcendence. One never forgets the first time one encountered Satori Cirucs. 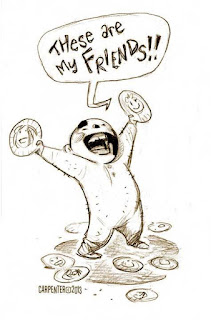 It's about time there was a documentary film that could properly produce a portrait of the agile and imaginative artist, himself. 'Being Satori Circus' is currently in production, by filmmaker Mark Finnell. And as Satori naturally found a home amid the burlesque scene, as well as the dark carnival world of Theatre Bizarre, he's making this weekend's spectacular Crofoot show be an all inclusive celebration.

These Are My Friends will feature the Theatre Bizarre Orchestra, as well as 'Pinch and Squeal' of Wizbang Circus, Lushes LaMoan, Josie Pace, Scott Dambacher, The F.A.H. Corps and the extraordinary lounge singer known as Konrad Lee. Satori Circus is going to be performing with the Theatre Bizarre Orchestra, and their set will be recorded live, inside the Crofoot Ballroom, for a forthcoming LP release. The multifaceted entertainments of the evening will be filmed by Finnell, to essentially be a capping sequence/montage for the forthcoming completion of the Satori documentary.

Satori Circus: These Are My Friends ~ Sat., Feb 10 ~ Crofoot