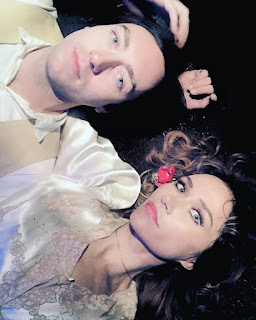 Ohio Wild can carry you away, like a tide down the shore at sunset.  The melodies sung and swelled together in harmony by Allison Laakko and Jim Byrne flutter with caprice, keeping to tender volumes and delicate intonation.

It's a closeness evoking a solitude from the city's clamor, heightened by a gossamer whisper of rhyming secrets incanted through cupped hands inside secluded environs, a country cabin where you're audience to something breathtakingly intimate, or playfully magical... Lullabies that give space for the voices, the rusty, reedy croon of Byrne and the dulcet, woozy serenade of Laakko, to gracefully bend, dip and waltz every note to apply the fullest potential for a melody's vine-like ability to lasso you off into their reveries.

Byrne and Laakko started singing together on a whim, not too long ago. The alchemy was almost instantaneous. A curious eavesdropper down the hall from them entered the room to interrupt their jam session and proclaimed that they weren't just singing; they'd  "...just formed a band...!"

For much of their lives, as individuals, Byrne and Laakko have both been a bit more cosmically attuned than most of us, with preternatural abilities to express themselves in song. But the experience of Greatest Hits does feel (and sound) like two halves finding complimenting harmonies and an overall aesthetic symmetry. And that aesthetic is a pastoral folk that feels detached and tranquil, with some gothic graphite shading the corners of the portrait. It might be telling that they fittingly soundtracked a surreal horror novel's theatrical adaptation, set in the late 19th century wilderness...

It's giving a baroque and dreamlike ribbon's curl to the silklike song strands laid out from a James Taylor or a Joni Mitchell kind of vibe, but adding their own characteristic inflections and melodic blends, always adding distinctive colors to the songs' canvas. Kudos to engineer Jim Diamond, who captured the inherent ability of these songs to seem as though they're enveloping you in this spellbinding fog, never too thick and never evaporating, coaxing you...ever further..., into the next song's uniquely dazzling sphere.

Laakko and Byrne bring Ohio Wild to the stage of PJs Lager House on June 20.