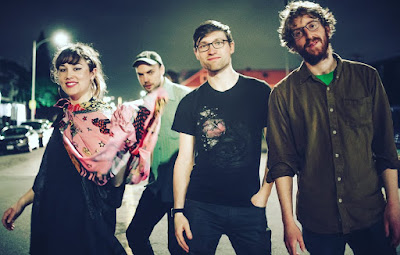 Hectic is a beautiful word to start to describe saajtak. Or, rather, the Detroit-based band find a way to make "hectic" sound beautiful. That's the title of their new EP, two epic songs spanning 15 entrancing minutes.

Harmony blossoms frequently throughout these extended arrangements, designed to take away the palatable hooks, familiar chord progressions and conventional downbeats and let a detached listener respond or adapt to a song through finding their own balanced cadence.

Ears acclimated to rock, pop, hip-hop or folk will have no other recourse but to consider their idiosyncratic and unbounded sonic designs to be a sleek outgrowth of something resembling jazz. But rather than trade off expressive solos and pivot instrumental phrasings, each of these four artists flows, or flourishes their musical capacities along uniquely tuneful and dynamic orchestrations--something like a sustained crescendo from four corners.

Simon Alexander-Adams casts spells on keys/electronics, Alex Koi's vocals soar, Jonathan Taylor provides frenetic percussion and Ben Willis gives the bass a mean but majestic growl. Each finds the updraft to catch and glide the song but uniquely controls their own flaps along the wing of the craft. At least that's where Hectic's got me digging....

The new EP will be out soon. But while you're here, let's listen to one of my favorite songs from last year, off of saajtak's first EP, Spokes...

You're never far from something booming, swooning, bending or flourishing. It's like a groove that keeps getting deeper, or at least allows for multiple levels and otherwise uncharted stylistic trenches.