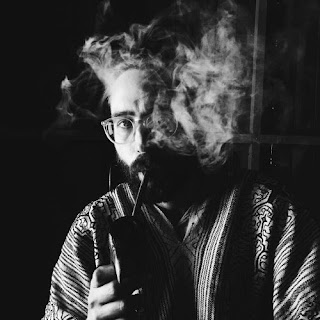 People often say that music can be like therapy; ...that just the experience of listening to a piece of music can make you feel better. Typically it's a pop song, something with immediate effervescence.... ...But it's something else when a song, or even a musical phrase or motif, can provide you with something deeper, namely: illumination; to where it feels like the song and its singer is giving you something, bestowing that healing to you in a sonic 5-minute ceremony that's exceedingly more intimate than any catharsis you might just rake from a regular radio song.

Santiparro is a singer/songwriter who spent much of his creative life here in Metro Detroit, but departed about 8 years ago to begin what seems, by intention, to be an endless odyssey. It's a journey I can only come to understand more fully by what's imparted in his lyrics, cast across holy-sounding melodies and ethereal incantations in a voice that sounds like it came from the ground, from the wind, from a cave, from a cloud.... And it becomes apparent through the songs of his forthcoming album, Talon, that that journey was more than just going out to spend time living beyond the borders of Michigan or the United States, but a deeper, metaphysical journey, to the depths of the soul, and back again.

Why am I getting this heavy about a piece of music before even describing it? I think you can intuit its extensively cosmic substance from streaming the lead single of Santiparro's Talon, below...


A kaleidoscope of styles and sounds congeal on every song, each with a fluid and adventurous arrangement; imagine Pet Sounds in the 80's fuzzy peak of shoegaze, or "Boxer"-era Simon & Garfunkel if they were produced by late 90's David Fridmann... Whereas Santiparro (aka Alan Scheurmann)'s previous albums, such as 2015's True Prayer, cultivated a progressive and elemental sounding folk, or future-folk aesthetic, Talon finds Santiparro entering danceable realms of rhythmic revelry, augmented by greater inclusion of synthesizers and sequenced beats. More than that, as emoted on the lyrics, the singer himself seems to be filled with a fresh distillation of energies - to where you can see this human as he sings to you, easily imagined with his eyes closed, something close to ecstasy or if not that just in the midst of a heightened empathic link to not just you and me and his own self, but, ambitiously, to other dimensions.

Santiparro's main collaborator on this venture is Kansas City-based producer J. Ashley Miller. And  I came to these conclusions about the intentions and themes of the album before I even zeroed in on the actual content of the lyrics. It's like I received the signals of this emotional content by what they captured and honed on the recording-itself, the performance of Scheurmann, the tones he reaches with his voice and the grainy gorgeous quality of his acoustic guitar over the majestic pianos. That's latticed beautifully over Miller's mix of the organic and the synthetic sounds, as well as co-navigating a way for Scheurmann to make a stylistic shift and come off sounding like a natural transition--wings spread from a former chrysalis. And each song builds, swells, blossoms...they might start out small, quiet, ambient, but they build and grow and add and combine, voices, guitars, pianos and just the right amount of reverb, delay and distortion.... It gives one pause. It gives one quite a lot, in fact, if you listen closely enough.

And the way in which these songs build, you can sense that Miller and Scheurmann were truly on a journey together, working out the recording at the Infoaming Vertex in KC. Whereas True Prayer featured cameos from artists like Bonnie "Prince" Billy and Kyp Malone, the only artists here are Scheurmann and Miller, and a few vocal cameos from Scheurmann's wife, Indy Genao. And while I can quote so many lyrics from this record for their profundity and wisdom, I think I'll go with a song you'll be able to hear, once it's released on August 3rd, which is titled "Ani Tana..."  "...you can get there // you already are..."