An Interview with Jaye Prime

Trying out a new music series where I check in with a different local artist every Friday... It won't matter if they've got something new coming out, or if they do or don't have a show on the horizon. We're just gonna talk! And we're starting off with an artist who I think is going to have an amazing year/future..., Jaye Prime! 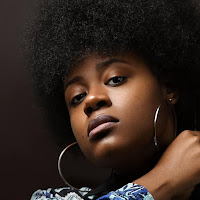 There's no easy way to begin to describe Jaye Prime, because the artist defies alignment with any single specific blueprint, whether its wearing the different hats of singer, rapper, or producer, or alternating modes (or genres) from funk, soul, trip-hop, R&B, rap, or some vibrant Venn Diagram of each all at once.

That’s why I plan to let Jaye Prime do most of the talking here..., but not before we take a listen to her latest single, “Rollin”...

What I might have found unclassifiable in the first paragraph might be a natural reaction to an artist who has gone beyond defining her life by a type of music and has instead defined herself from a perch that poises her at the periphery of all music. She first caught my ear more than two years ago when Assemble Sound produced her single, “Lucid...,” and that’s an affecting title, apt to capture her multifaceted abilities for threading evocative melodies over beat arrangements that forge lyrics of a crystalline reflection, an aural echo of what she encounters, a contemplative cut to the bone expression to capture an experience..., like the lucid surface of water, mirroring back whatever moods, meetings or muses she encounters and coming to her own resolutions.

Jaye Prime grew up on the Westside of Detroit; her parents were both in the local entertainment industry. She followed up that aforementioned 2016 single with an album in 2017, Facing, a conceptual production of forthright confessionals and proclamations stemming from the experience of smoking alone. Along with several collaborations over the past two years, she released “Rollin’” in early December.

What would you consider one of your most formative moments as an artist? What made it clear that you’d be pursuing music, songwriting, lyricism...?
I didn’t grow up in a place where you saw people pursuing music as a real career or a true foundation for what your mark will be as a person in this life. So, for me it’s every interaction I have with supporters. Every conversation I have with stranger telling me my music got them through something or they can’t wait to see me blow up. I’ve always loved music. My parents love music. For lack of better words, I am music. But seeing something I can’t live without, something that I know in my soul I’m meant to do, be a light in someone else’s life, that pushes me to keep going as professional artist.


You’ve steadily carved out your own space over the last two years, blurring between any boundary of genre or categorization. What distinguishes your approach to songwriting, or just your whole creative process...?
Finding my “space” in the world of music is interesting - essentially it’s all vibrations..., so everything I put out is really just energy that’s been poured into me. I wouldn’t consider myself ‘a hip-hop artist’ at all..., i just like my drums banging. FACING is actually more of a reflection of me musically than anything else I’ve done so far & I’m getting better with portraying my mental state musically.

My creative process is still developing. I started out recording alone, in a closet; just doing everything in solitude. But my music is a part of me, so now I feel the need to be involved in all aspects, which makes it all more genuine, more personal. As far as being distinctive from any other traditional approach...? ... I really don’t believe that’s a real thing. Everyone has their freaky ways in the studio: it’s just about finding someone with waves that’s on the same frequency as you, at least for that moment.


I wouldn’t ask if there’s any formula, per se, but are there certain elements, certain moods/feels, or even a message/emotion in the lyrics..., that have to be there before it feels like a Jaye Prime song? Is it a complete openness to experimentation or following wherever a muse takes you?
I don’t usually think about my lyrics initially. I have to get comfortable in the session; almost wanna have some house shoes on & get everybody laughing, feeling like they’re at the crib. If I’m not comfortable, I struggle to not over think... But once I’m comfortable enough to get going, I focus heavy on having the right production before I get into actual “writing”. I’m more into melody first then the words kinda come on their own. I review after I record & see if it aligns with what I may want for the track.

I don’t set expectations for my songs anymore & I’ve made it a point to not worry about writing. If I can remember a song without writing it down, it’s because it feels good to me. That’s what I want & I want you to feel good as a listener. I just go with what feels good. I came up with “Nimbus” when I was driving to work. Wherever I feel it, whatever it’s coming from, I try to embrace it. Good music is just innovated energy.


Are there any artists, contemporaries around the Detroit music scene, that you’ve drawn inspiration from...?
Detroit’s music scene is outrageous - there’s so much that it’s low-key overwhelming sometimes. But recently, I’ve been putting in a lot of work to get back into my live instrumentation bag. I play the trumpet so the jazz scene has been giving me real good vibes lately. One specifically is Ian Fink. I’m really into jazz so seeing someone from my city, close to my age & freaking the genre in their own way like he does super hype.

2019 has only really just begun... What’s the future hold?
My plans really consist of becoming a better artist. Just educating myself in business, practicing theory, studying those that’s been doing this long before I knew what it was. As for music, I have a band called PPT & us playing live is a priority for me so I definitely plan on having more shows. I’ve also been sitting on a good amount of music for some time now so I may drop some grooves here & there.

https://soundcloud.com/jayeprime
Posted by jeff milo at 8:53 AM