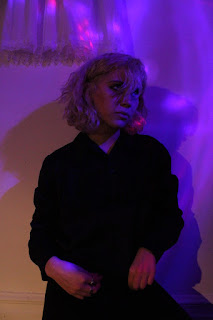 Chloë guitar riffs are like a series of tiny explosions, a sustained roil that scintillates through the distortion to augment the rhythms of the drum and bass. It's like the grooved treads of a dirt-bike wheel, revved to near-dangerous velocities and grinding through the mud and soil and splaying it everywhere. It's the coiled foam of a wave that crests off a fiberglass surfboard that's turned at the last second from perilous rocks. It's driving. It instills the urge to stomp one's foot, to flex any muscle, to furrow your brow with a cool catharsis and shake your head to the beat...

Chloë Drallos is the guitarist and lead singer of Zilched, and she can do a much better job of describing her own proclivities toward a sheen of reverb.  Drallos formed the band in the summer of 2017, drawing from a blend of wavy shoegaze, punk, and lo-fi indie-rock. The band features Nick Russo on drums and Elliot Thomas on bass. They released their first single in Feb of 2018  and followed it up by an EP just last November.


I've had a hard time picking a favorite, but I'd like to share the first single, "From The Grave."

Let's talk about reverb, distortion and fuzz! What is it about effecting tones that you enjoy most and what can it add to a song that might be missing if everything was otherwise crisp and crystal clear?
Chloë Drallos: There’s just so much to feel, in any wall of sound My first time hearing records like (Sonic Youth's) Goo or (Jesus & Mary Chain's) Psychocandy, when I was 16, my views on sound entirely flipped. I think I felt recognized and comforted by the like, flowing, and organized dissonance. If that makes sense...? I don’t necessarily feel anything is missing from a clean tone; many of my favorite songs are very clean and simple guitar songs. It’s all comes down to the means of expression.

Okay, here's just an overarching origin-kinda question: When and how did you start playing guitar.... like, when & what inspired you to start writing songs? And were you in anything before Zilched?
Chloë  Drallos: Well when I was about 12, Bob Dylan was God. Admittedly, It started with a ukulele. After inevitably exhausting that one out, I got an acoustic guitar for Christmas one year and later started a folk band with my cousin, Emily (she was also the original bassist for Zilched). Our songs were about running away, being on the road, and these like dramatic, apocalyptic...love stories... I had no experience on any of these subjects. I think Dylan and The Shins were the first to make me really care about writing, although my interest faded in and out until about mid high school, when my social life was at a low.

My first question was about the guitar, but what about lyrics? I think the effects and guitar phrasing adds to a feeling of on-edgeness that is countered by melodies, but the words in those melodies are also..., for lack of a better word, edgy...or they aren't about perfect love and sunshine and road-trips and parties...they tend to throw this refreshing shoulder-check into the listener... What kind of outlet does lyric writing provide..., is it confessional, cathartic, autobiographical, social commentary...
CD: Haha..., I’d say it is a mix of both commentary and confession. I’ve always had a lot to say and twice as much on my mind, so I don’t really go in with any intentions other than to lay out my own feelings and make sense of them to myself. Artists like Pj Harvey, (early) Madonna, and Cat Power really opened my eyes to honest songwriting and just laying it all out on the table. I think the “edge” comes from within that honesty. Although I admit I have a much easier time being so blunt through the safety of a song. It’s all more an eye roll than a fist fight, even if the lyrics come off brash. As for the listeners, all I can hope is that they feel something in return.

What was the recording experience for Pulling Teeth like?
Quick! We recorded and mixed it over the course of three different sessions in the basement of our friend, Bill (who is literally “The Dude”). Basically whenever he had time for us he’d text me and I’d drop everything and head over. Nick, our drummer, having just joined the band, had only known the 5 songs for about a week. We recorded all the drum tracks in just two hours and it was right before a gig one day; bad idea. Later we tracked bass, guitar and vocals in one late night. I’m not trained in any way but I’m still a huge perfectionist when it comes to hearing my own vocals, so that was definitely the longest, hardest part of it all. I had sat on the demos for about two weeks, taking notes on every little idea, before going back to mix and add some more melodies in the last long night.


Future plans in 2019?
....Tour! We’re going on our first tour (...starting at the Blockhouse in Bloomington, IN, Jan 26)... Doing a couple short legs, first hitting the Midwest in the end of January and then out to the East Coast early February. You can find all the dates for upcoming shows and festivals on our Facebook, Instagram, Bandcamp, all that jazz.... Aside from playing new places, (we're) just continually creating and exploring our sound as a band. Maybe we'll release a couple singles as the full length pieces itself together. Just have to wait and see