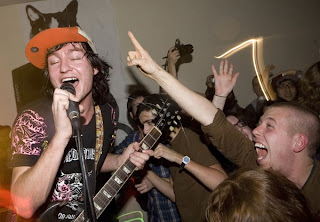 Every Word Means Everything:


(Johnny Sierra from the Death Set)

It’s anthemic and feral, this freaked-up unfounded devastation-punk style brought by the duo (Johnny Seirra and Beau Velasco) known as The Death Set. There’s innocence in their sugary melodies, an air of curfew-breaking mischief – and yet there’s undoubted ferocity, like nitroglycerine chicken dance bar fighting. Yet, this is not the adversarial punk born from hardcore, or the too-cool esoteric punk wrought by the arty-NY-’77 trip; it has a sort of you leave us alone, we’ll leave you alone kind of vibe to it in the sense that it’s very celebratory, not malicious, very inclusive, very raise-your-fists and just forget dance moves—just slosh around with the rest of us in this sweaty basement of a hot-breath harried night.

They originate from the Gold Coast of Australia – where they met in 05, plugged in their guitars and their synthesizers and their drum machines and got really motivated to tour and record – which meant moving to Sydney and soon to Brooklyn and then to Baltimore. Once in Baltimore, they found a flourishing outsider art/underground scene and shacked up in a warehouse/artists enclave to record early releases like To EP and Rad Warehouses Bad Neighborhoods EP.

They’re style thrives on this blown-out electro-rush aesthetic; essentially a mutant hybrid of cute-sounding genres of electro-punk and electro-pop, with a bit of rock and a lot of ravenous, gnawing energy.

Earlier this year, they released a definitive 18 songs in 25 minutes, on the Worldwide LP and a little more than a month ago they played an inspired and quintessentially spastic set as part of Detour’s Rock City line up.

DC/Milo: What was it like recording 'Worldwide,' was it standard procedure more or less of recording in your own studio with your various electronic contraptions? is there extra meaning to the title-at all connected to transplanting from Australia to here?


JS/DS: Uuuum it was a pretty relaxed process. We did it at our own pace and tweaked till we were happy with the process. Lots of youtubing hip hop videos, skateboarding and eating Basmati Riceand tofu in between. Instruments came and went. ...borrowed Junos to pots and pans all in there...


The title came from an idea we had which was to make a punk flag. We wanted it to be like a bike gang where it says the name of the club up the top, the image then the home town below. Like Black label NYC for example. But then it kind of became apparent that the band wasn't really rooted in any one place so it was just "Worldwide". Which i think is pretty bad ass:)


DC: Since it's been out for a while, what are you working on next? or looking forward to?

JS: From January we have been in full touring mode. US, Canada, UK, Europe all multiple times now Japan. Hopefully Australia after Japan and Europe. Be nice to kiss home soils again. Then I'm looking forward to getting back into the studio and making some new tunes. Im excited to keep making music that makes me excited to be honest, Whether that be with DeathSet or other projects. I think I want to start doing karate again too. Snappin necks.`


DC: Songs like Negative Thinking and Around the World hold some very affirming lyrics, expressing personal philosophies of self-empowerment/words to live by - which causes me to lean toward hearing 'fuck everybody else because this is how we're doing it and we feel confident about this way...' does that ring true for you at all - is it this kind of healthy-defiance that leads you to the sensibilities of Punk? or are you more laid back about life?

JS: For me the biggest battles are the ones inside my own head. Like really not trying to let outside influences control my experiences but rather letting my inside thoughts and feelings control my exterior. So it's definitely "not a fuck everyone else" attitude. its more of a "how can I control my mindset so it's best for me and the people care about surrounding me". I would like to think I am confident but the truth is its something I try and work every day on. Trying to make everything better every day in every way with that P.M.A. (Positive Mental Attitude, insert Bad Brains shout out right here). 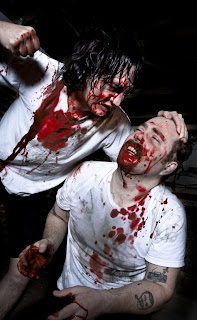 DC: ...and, punk is often harped upon when people are writing about your music--or, indeed, when they're asking you questiosn..., what are some of your non-punk influences?


JS: I/We all listen to as much hip hop and electronic music as punk. Positivity always. Friends bands of course. Shout out to Matt and Kim, Ninja Sonik, Daedelus my favs right now. I love awkward kid bands too. Polished ready for their publicity, right hair cut bands really make my stomach turn.

DC: I really dig a lyric like 'i don't want to be like the people i've liked...' (Negative Thinking chorus)

JS: Thanks. Sometimes the lyrics are just honest and sincere like that one. But they can also be flippant and nonsensical in the next second.

JS: I think the aesthetic of Providence bands like Lightning Bolt were really influential when it came to seeing videos of kids just spazzing the fuck out. I'd never seen anything like that before in Australia. As for sonically It was funny as Beau and I both made electronic music and played in punk bands but started at opposite times and met in the middle vomiting out this strange little beast.

DC: What is your current live set up and are there any new things you've been experimenting with - or would like to try?

JS: Right now the the live set up includes two live drummers as well as the beats, two guitars and two vocals. It really makes the live shows way more dynamic and more of a punk rock show which is rad. The juxtaposing that with hip hop and pop culture samples is always fun. For the next record Im really interested with focussing a lot of time with my beat making and production. Should be super fun.


DC: Now that you've been together and played and toured for years, are you, for lack of a better word, militant, about getting the crowd involved and getting them to feed off the energy? what was it like starting out in your first shows as the Death Set?

JS: Sometimes its a catch 22. Cause a lot of the time the shows are just expected to be rawkus so the fire to really spaz is less but there are always times to win a crowd over or at least leave those stupid hipsters with their mouths open wide at the least. Which is always fun.